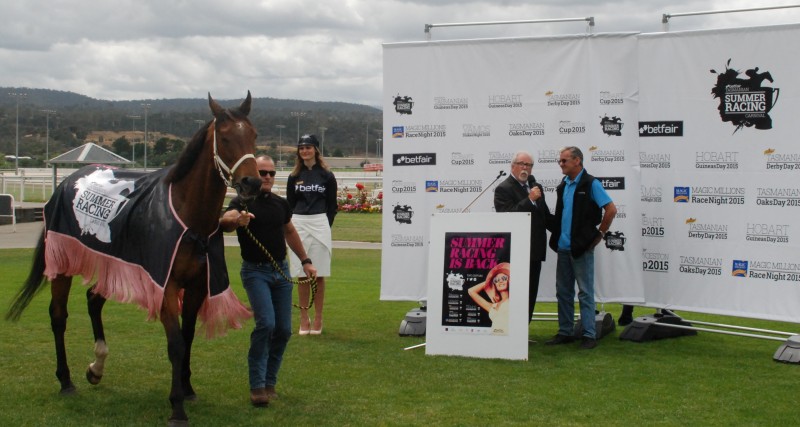 STAR Tasmanian galloper The Cleaner stole the show at the official launch of the 2015 Betfair Tasmanian Summer Racing Carnival in Launceston today.

As Racing Minister Jeremy Rockliff spoke to the gathering of industry participants, special guests and media representatives of the $3 million that will be offered over the five weeks of the carnival, all eyes were on The Cleaner who paraded in the mounting yard.

The Cleaner looked in great shape and his trainer Mick Burles said he was confident the horse would tackle the George Adams Plate over 1600 metres on the last day of the carnival Launceston Cup day.

The Racing Minister said the 2015 carnival promises to be the best since its inception in 2005.

“More than $3 million will be up for grabs in prize money at this year’s carnival and there’s no doubt this will generate exposure for the racing industry in important markets interstate, and the series of social events will provide off-course economic benefits for the state through retail, fashion and accommodation spending,” The Minister said.

“Betfair’s partnership with Tasracing and the host clubs, the Tasmanian Turf Club (TTC) and the Tasmanian Racing Club (TRC), is entering its second year of delivering the carnival.”

“I want to encourage Tasmanians to catch the track-side excitement at the 2015 Betfair Tasmanian Summer Racing Carnival and back the industry that supports many jobs.”

“The industry is also a strong contributor to the Tasmanian economy and generates more than $100 million in economic activity every year.

TattsBet, meanwhile, is again offering a $100,000 bonus for the owner and trainer of any horse that can win both the Betfair Hobart and Launceston Cups in the one year.

Last year, the Mick Kent trained Epingle achieved the double for the first time since 2004.

Tasracing and the host clubs are confident the carnival will attract strong local and interstate interest, with Tasmanian horses such as The Cleaner, Gee Gees Blackflash, Admiral and Valiant Warrior expected to feature prominently in the carnival’s marquee races.

Last year the 2014 carnival celebrated about $1.4 million of prize money, or 70 per cent of the total prize pool, won by Tasmanian horses.

This was clearly a good result for the industry– it confirmed we can compete with interstate horses and prize money was kept in the state for the benefit of the industry and the economy.

The carnival will officially start in Hobart on Sunday, 11 January and conclude on 25 February on Betfair Launceston Cup Day. This year’s Betfair Hobart Cup is on Monday 9 February.

There are two Wednesday night meetings in Launceston (21 January and 18 February) and a Friday twilight meeting in Hobart (6 February) leading into the Hobart Cup.

The Cleaner, which attracted so much attention interstate during the Melbourne Spring Carnival, is a Magic Millions sale graduate from 2009