A champion becomes a legend 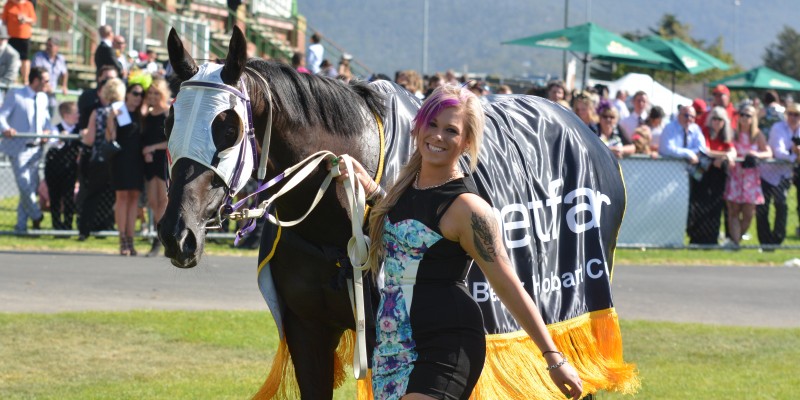 STAR Tasmanian galloper Geegees Blackflash raced his way into legend status at Tattersall’s Park today when he powered his way to a brilliant win in the $225,000 Group 3 Betfair Hobart Cup over 2400m.

Already regarded a champion in his home state, the John Luttrell-trained eight-year-old came from looked a hopeless position 500m out to power home and hold out the gallant Genuine Lad over the concluding stages with Banca Mo a game third ahead of Ollie’s Gold.

Luttrell was ecstatic after the race.

“To do whet this horse did to come from where he was down the back to win against this quality field is just unbelievable,” Luttrell said.

“People don’t know how much this means to me. The horse and I are as close as any trainer and horse can be – he’s more like a mate.”

“I was so confident that he was at his top that I just couldn’t have him being beaten on his work and what he’d done going into this race and again he’s proven me right.”

“We will go to the Launceston Cup now and that will do home for this prep, “he said.

It was a big result for Tasmanian apprentice Siggy Carr who left the state last year to try her luck in South Australia.

She was targeted by owners Paul and Elizabeth Geard to ride “The Flash” throughout his campaign.

“He jumped well but there was so much speed we just got carted back to the rear and I thought – what have I done,” Carr said.

But when I managed to get onto the back of Pelicano I thought he’d take me into the race but then that didn’t eventuate.

But we got a clear run turning for home and he showed an awesome turn of foot and once we balanced up I thought he would win.”

“I was still a bit worried about Genuine Lad that was still coming but the Flash kept finding because he such a great horse,” Carr said.

Owner Paul Geard had to hold back tears as he described what the win meant to him and his wife Elizabeth who together own and operate GG Horse Stud that has about 140 horses in the books.

“This is probably the most wonderful day in my life from a horse racing perspective,” Geard said.

“Words just can’t adequately explain how Elizabeth and I are feeling right at this minute,” he said.

The win was the third leg of a consecutive feature race treble for the Geards who also own the $100,000 2YO Motors Elwick Stakes winner Gee Gees Top Notch (also trained by Luttrell) and the Stuart Gandy-trained Geegees Goldengirl that easily won the $100,000 Strutt Stakes for three-year-old fillies.