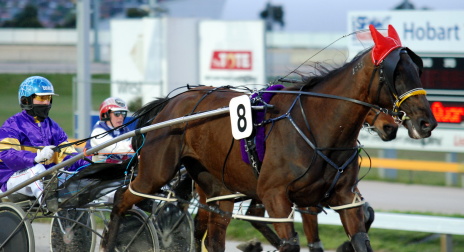 THE fourth race harness on last Sunday night’s card at Tattersall’s Park proved to be an action packed event with the favourite Zurbaran emerging victorious but not before a lengthy inquiry in the stewards room that had to deal with a number of issues during the race.

Drivers’ actions during the race were questioned by the stewards’ panel that is headed by new chief stipe Anthony McConnell and protests fired in by the drivers of minor placegetters added fuel to the fire.

The race leader and heavily-backed second favourite Levina Leis capitulated in the home straight to finish a disappointing last that left her trainer Barrie Rattray lost for words.

Rattray told stewards that he would ensure a blood test was completed on the mare and stewards demanded notification of those results.

The stewards’ report for race four is as follows:

Barrie Rattray, trainer of Levina Leis which performed below market expectations could offer no explanation for the disappointing performance of the mare.

Mr Rattray gave an undertaking that he would be taking blood samples from the mare and he would report any adverse findings to Stewards.

A veterinary examination of Levina Leis subsequent to the race failed to reveal any apparent abnormality.

Alex Ashwood, driver of Zurbaran explained that it was his intention to attempt to obtain a trail on the back of Levina Leis shortly after the start, but he formed the view that Levina Leis may well be crossed and he would be left on the peg line and for this reason he changed his tactics and attempted to obtain a position in the running line shortly after the start.

Passing the 2000m Thirtysixtoes when being restrained contacted the sulky wheel of Ark West (Justin Howlett) which hung in slightly.

Thirtysixtoes then raced roughly and lost ground. Prior to the contact the tightening was aggravated as a result of Thirtysixtoes racing wheel to wheel with Zurbaran to its inside. Justin Howlett was notified he would be expected to do more to protect his fellow drivers when in similar circumstances.

Near the 500m Ark West which had initially been eased up the track by Zurbaran then raced roughly for a short distance when competing for a position in the three wide line with that gelding.

While accepting that Ark West was not fully responsible for this incident driver Justin Howlett was notified to exercise care when in similar circumstances.

A warning was issued against the racing manners of Ark West.

Prior to all clear Beau Luttrell driver of 6th placegetter Thirtysixtoes and Justin Howlett driver of 3rd placegetter Ark West viewed the video of the race before both lodging protests.

During the course of the hearing Beau Luttrell also lodged an additional protest against Ark West on the grounds of interference shortly after the start.