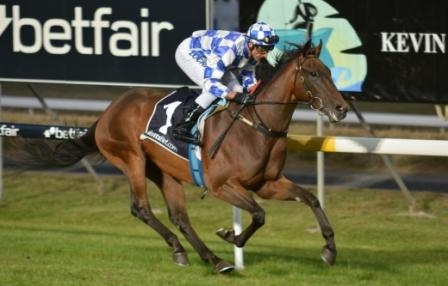 LAST season’s best two-year-old Admiral gave everyone a peek into the future when he powered his way to one of the easiest wins seen in a feature race this season when he took out the Steve’s Liquor 3YO Trophy over 1400m in Launceston last night.

Admiral resumed from his spell with a game second to Valiant Warrior in the 3YO Cup over 1200 metres two weeks ago when he carried 60 kilograms and gave away a lot in weight but back to set weights and stepping up to 1400 metres made him unbeatable.

With top jockey Brendon McCoull aboard, Admiral settled second while Valiant Warrior assumed his normal role in front but when McCoull asked his charge for the big effort he slipped into another gear and powered away from his rivals to score by over four lengths from Valiant Warrior with Geegees Goldengirl working home well to grab third a long neck astern.

The Barry Campbell-trained three-year-old could not have been more impressive and will now head to the Tasmanian Guineas (1600m) on January 11 brimming with confidence.

“After his first-up run Brendon (McCoull) suggested we take the blinkers off because he probably pulled up when he hit the front and it looks like that was clearly the right move,” Campbell said.

“He was impressive tonight and he is only going to get better.”

“We will take him to Hobart in 10 days for the Tasmanian Guineas and then we have to decide whether we go to the Derby (2100m) or have a crack at the weight-for-age Thomas Lyons (1400m) on Hobart Cup day,” he said.