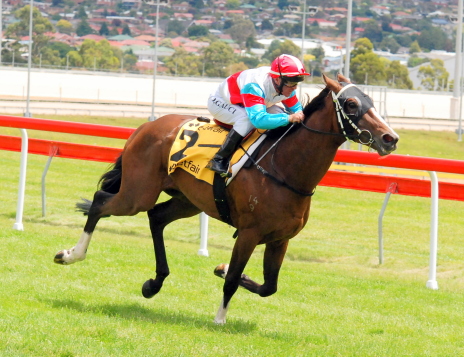 Trainer Gary White was excited by the win and declared the Hobart Guineas as the three-year-old’s next target.

Alarmist (Darren Gauci) began well from an inside gate but when the pace sharpened appreciably rider Gauci took hold and Alarmist eased to trail the speed.

When Gauci gave his charge a bit more rein the gelding cruised to the leader and burst clear at the top of the straight.

But the most impressive part of the win was Alarmist’s endeavor over the final 200 metres which saw him draw clear and hit the line strongly ahead of the well-backed Cerise Sauvage with Steven’s Wonder a close-up third and just ahead of rank outsider Da Pointe.

The Eastlands Hobart Guineas is the feature race on the opening day of the 2013 AAMI Tasmanian Summer Racing Carnival.

Listen to what trainer Gary White had to say about Alarmist’s win inHobart– click here for the audio file.