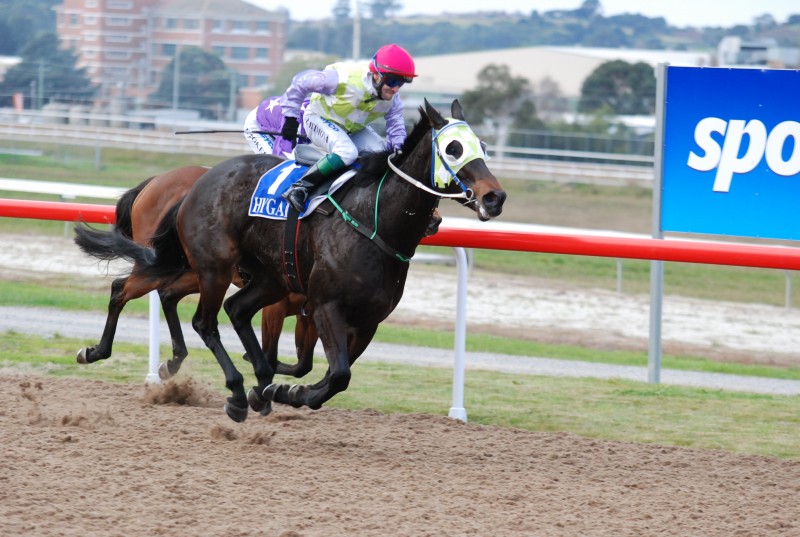 QUALITY Tasmanian mare Black ‘N’ Tough will head to Melbourne next week on a hit and run mission at MooneeValley.

Black ‘N’ Tough resumed from a spell with a courageous victory over star three-year-old Arenzano in the fays Jewellers Diamond Bracelet over 1150 metres on her home track at Spreyton last Sunday.

The Leon Wells-trained mare was ridden superbly by stable apprentice Rasit Yetimova who allowed the mare to track Arenzano to the home turn and he waited until straightening for the run home before calling on the four-year-old for the supreme effort.

Arenzano was game in defeat and her effort was even more meritorious given the saddle slipped about 700 metres from home and it (saddle) was up around her wither by the time she reached the finish post.

Wells is delighted with how Black ‘N’ Tough pulled after her first-up assignment.

“I couldn’t be happier with how this mare raced and pulled up afterwards,” Wells said yesterday.

“There’s very little for her here in Tasmania at the moment so we are going to try our luck across the water and to be honest she is a classy mare that deserves the chance to prove herself on the mainland,” he said.

Wells said he will nominate the mare for two races at MooneeValley on Saturday week (June 29).

“We will wait and see what weight she gets in both and then decide which way to go,” Wells said.

“Tasmanian-born jockey Craig Newitt, who is at present riding at Ascot in the UK, is expected to ride Black ‘N’ Tough at The Valley.

Wells confirmed it will be a one-race mission.

“She will come back to Tasmania for a spell straight after the Moonee Valley run and I expect she will have about a month off and we might look at running her first-up in the (Tasmanian) Newmarket and then head towards the feature mares’ races during the Tasmanian carnival.”

Meanwhile, star front-running Tasmanian stayer The Cleaner heads to Melbourne tomorrow (Thursday) for his assignment over 1600 metres at Flemington on Saturday.

The Cleaner’s trainer Mick Burles trialed his stable star last week and the gelding looked good in leading all the way to easily win the 700-metre hit-out on his home track at Longford.

The gelding will run for Burles on Saturday but the owners have opted to transfer The Cleaner into the care of top Victorian trainer Robert Smerdon who will prepare the five-year-old during an extensive interstate campaign.