All Wrapped Up wins on debut at bolter’s odds 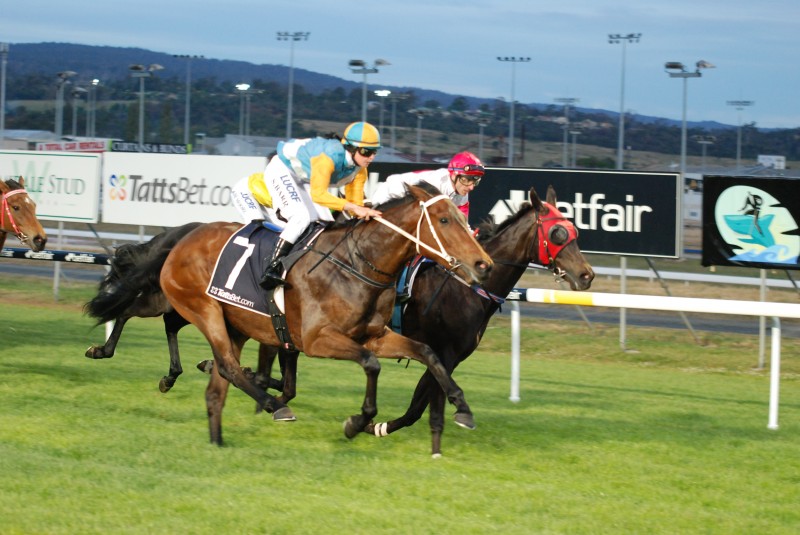 WHILE most punters would have been turning their tote tickets into confetti after rank outsider All Wrapped Up got up in the last stride to defeat odds-on favourite Flying in a maiden in Launceston last night there were a loyal few reveling in the win All Wrapped Up started the rank outsider at $126 but stormed home to win like an odds-on chance to defeat perennial runner-up Flying Stevie with the heavily backed Irish Jack ($5.50 into $3.40) a tiring third.

The judge called for the photo-finish and when All Wrapped Up’s number lit up the semaphore board a small band of faithful stable followers let out raucous cheers of joy with one of the happy punters waving a $10 each-way ticket that would net him a $1230 dividend.

Co-trainer Tania Hanson said she and her father and co-trainer Ken Hanson had ventured out to Armidale Stud and plucked the gelding from the paddock and leased him wit the hope of finding another Tasmanian Derby prospect.

“We were looking for a Derby prospect so we selected this horse and while he was at big odds tonight he has shown us a bit on the training track so it wasn’t a complete shock,” Tania Hanson said.

The Hansons leased Moonrise from Armidale Stud with the hope of winning a Derby and last season he won them a Hobart Guineas and went on to contest the Derby and ran a creditable fifth.

When All Wrapped Up won it should have sent a signal for punters to follow up and back Moonless in the last race on he eight-event card.

Those who did were rewarded as Moonless stormed home to give the Hansons and their stable apprentice a much needed double.

It was Moonless’s first win since emerging triumphant in last season’s $100,000 Listed Hobart Guineas at Tattersall’s Park in Hobart in January.