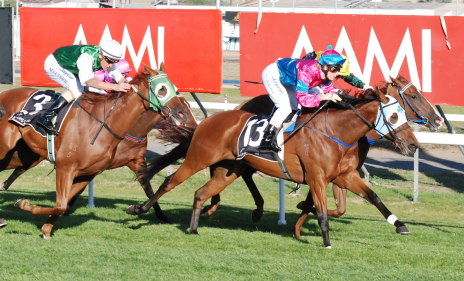 LAUNCESTON hotelier Phil Griggs finally experienced the joy of being a winning owner when his three-year-old filly Allgone broke her maiden status in the Star Cheers Maiden Plate over 1400 metres at The TOTE Racing Centre in Launceston last night.

It was a huge turnaround in form given the filly had finished well down the track at her two previous assignments and punters shied away from her with her price stretching from around $20 when betting opened to her starting price of $41.

However, her trainer Barry Baker said the win was not a surprise and her appearance in the mounting yard prior to the race suggested she did not warrant such being sent out at such long odds.

Allgone was ridden by Casey Bruce who had her settled midfield after travelling 300 metres and she was poised to pounce when the field turned for home.

It developed into a slog-fest over the final 200 metres with five of the field of 13 battling for the right to be no longer dubbed a maiden.

In the end Allgone showed the most courage and forged clear on the line to defeat Dazzling Day that rattled home along the rails and Ground Control that worked home nicely from well back on the turn.

Griggs has been racing horses for many years and he was elated to have finally tasted success.

“This is every bit as good as they said it would be (winning a race),” Griggs said.

“It has been a long time coming but worth the wait,” he said.

Baker also was thrilled with the win and admitted the filly had been a “work in progress” given the problems she had with tying up and other niggling issues.

Listen to what trainer Barry Baker had to say about Allgone’s win after the race – click here .