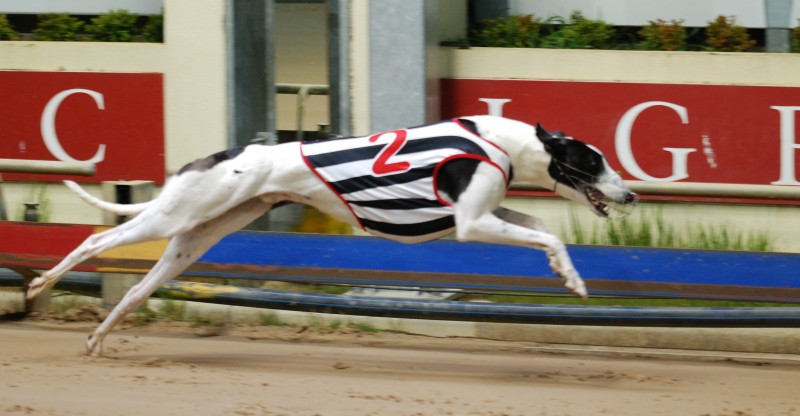 AMAZING HARRY  guaranteed his place in next week’s Minister’s Gift final with an impressive second round heat win over 515 metres in Launceston tonight (Monday).

The Terry Ackerly-trained dog won his first round heat in Hobart but this latest effort proved beyond doubt he has come of age as a quality sprinter.

He was slowly away from box two and was bustled and crowded when trying to boot through to vie for the lead nearing the first turn.

But somehow he barged his way through to find the lead heading out of the first turn while others suffered sever interference especially Winklea Rose that was turned inside out and fell.

Amazing Harry extended his lead down the back stretch and went on to score by four length s from Buckle Up Barney with Real Caution over three lengths away third.

The Minister’s Gift comprises two rounds of heats with points awarded according to finish positions with 11 awarded to the winner, eight for second and six for third with four points given to fourth place reducing by one through to seventh with no points for last.

Amazing Harry earned maximum points to be assured a berth in the final at Devonport next Tuesday.

Ackerly was delighted with his Launceston heat win.

“When he missed the start I thought that would be the end of it but somehow he managed to barge his way through and I was shocked to see him in front heading out of the first turn,” Ackerly said.

“He is a classy dog with good habits and he goes into the final with good form on the Devonport track,” he said.

Real caution did a good job to finish as close as he did because he was pole-axed at the first turn but he still managed to make it through to the final.

Daniel’s Bay also won both of his heats with Monday night’s effort very sound, scoring comfortably from Wynburn Loco that was also second in his first round heat to earn enough points to snare a final berth.

Daniel’s Bay has struck a purple patch of form with this latest win his third in succession.

Bailey’s Comet smashed his rivals to easily win his heat by over 10 lengths. In a field of six he began well from box six and had the lead at the first turn and extended the margin at every turn.

The Butch Deverell-trained bitch also won her heat in Hobart and will go into the final one of the top chances.

Wynburn Rush had no luck in his Hobart heat but he led all the way to win his second round heat in Launceston to scrape into the final with 12 points.

Maurie Baba finished second to Wynburn Rush that gave him enough points to gain a place in the final.

Underground had been struggling to find form but a second in his heat in Hobart and a courageous win in his Launceston heat suggests he will give the final a shake if he draws close to the inside.