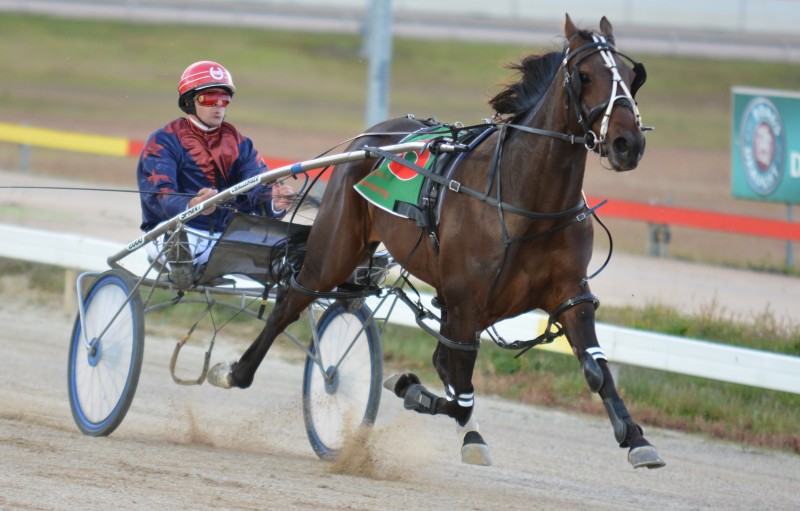 WELL bred four-year-old mare Angela De Marco delivered a clinical display to score an effortless win in a C2-C3 event over 2090 metres at Tattersall’s Park in Hobart on Monday night.

After circumnavigating the field to find the front at the half-way mark of the race, the Tony Petersen-trained mare left her rivals in her wake in the home straight to go on and score by almost seven metres from Bone Fide Hustler with Bertils Delight a half-metre away third.

Angela De Marco showed above average ability when she arrived from New Zealand early last year but after only  two outings that resulted in one minor placing she was sent for a spell.

She returned in June last year and emerged triumphant at her second try and proceeded to win four of her next seven starts.

Petersen gave her a spell in September last year and from six tries this time in she has won twice with those victories coming from her past three starts.

The mare is owned by Jamie Cockshutt and Barry Cooper who have had a lot of success with horses they have purchased in New Zealand.

The owners finished the meeting with a double courtesy of another NZ-bred mare named Something Eyre scoring an effortless win in a C4-C5 over 2090 metres.

Again with Ricky Duggan aboard, Something Eyre showed speed from gate two but not enough to hold out Notimetothink that crossed from gate three to lead.

Duggan got off the fence to face the breeze but he soon had cover when Kinky Boots set off from the rear to race around the field to find the breeze and leave the favourite in the one-out-one-back spot.

Duggan eased the four-year-old gelding out three-wide to make his charge in the back straight the last time while Kinky Boots swept past Notimetothink to assume control.

But while Dylan Ford was hard at Kinky Boots on t7he home turn Duggan had a form hold of Something Eyre.

Duggan allowed Something Eyre to roll to the front at the top of the home straight and only had to give him a couple of flicks with the persuader to ensure he scored an emphatic win over Saloon In Flight with Rajah Wealth getting home well tom edge out Kinky Boots for third.