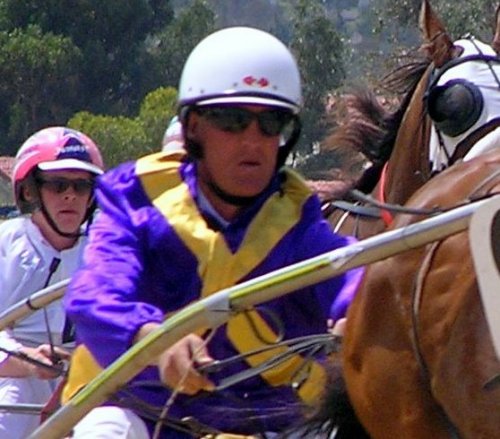 DOUG “Scuba” McLaine celebrated one of the biggest wins of his training career when six-year-old Angus McGregor caused a boilover in the $20,000 Hobart Pacing Cup at Tattersall’s Park on Sunday night.

Sent out as one of the outsiders at $55, Angus McGregor was given the run of the race by underrated reinsman Simon Ford who settled his charge in the one-out-one-back position.

When Ford eased his charge three-wide leaving the back straight and called on the gelding for the supreme effort, Angus McGregor powered home and had all the answers over the concluding stages to score from Sky Tower with Kalypson Kid third.

Angus McGregor didn’t deserve to be at such huge odds, given his previous effort when second to Our Sir Jeckyl in a free-for-all last Sunday week when he sat parked three-wide for the last lap.

Our Sir Jeckyl was sent out the firm favourite ($2.40) but after stepping to the front he galloped three times in the space of 200 metres and was eventually retired from the race.

Angus McGregor is owned by the trainer’s daughter Lisa McLaine who said the win was not unexpected.

She said stablehand Sharon Patterson had been a big help as she had been driving the horse in his track work owing to her father’s neck injury.

The trainer suffered a serious neck injury about seven months ago as a result of an incident on the training track.

McLaine was not at the track to see the win.

Ford has been driving for 21 years and had only had one other drive in a Hobart Pacing Cup for a fourth aboard Tastic Bradley in the race won by The Warp Drive.

Listen to what Simon Ford had to say about his first feature race win – click here .