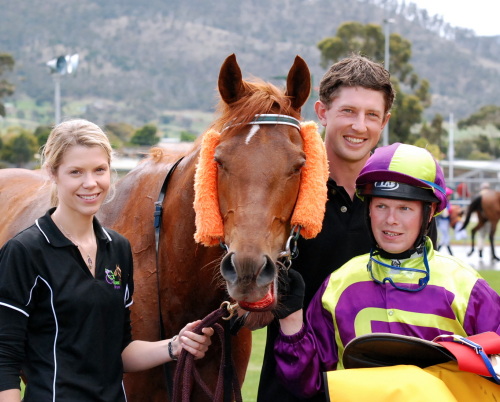 The Stuart Gandy-trained four-year-old was never better than three-wide for the duration of the 1400 metres but still had enough in reserve to stave off a determined challenge from the favourite Troyana over the final 200 metres.

It was only the mare’s fourth career start and second run this preparation.

Gandy said she has always shown ability but was a late maturer and destined for a staying career.

Wilson moved to Australia over two years ago to join the Robbie Laing stable in Victoria where he was primarily employed as a jumps jockey.

However two broken wrists in a race fall sidelined the rider for about a year.

“After I broke bnoth wrists I had a year off, during which time Michael Trinder (Tasmanian trainer) suggested I make a move to Tasmania to further my career,” Wilson said.

“I’ve been here with Michael since February bnut I wasn’t able to ride because of red tape over my visa but everything’s now sorted out,” he said.

Listen to what trainer Stuart Gandy had to say about Annie’s Gee Gee’s win – click here .