Another test for King Kalakaua 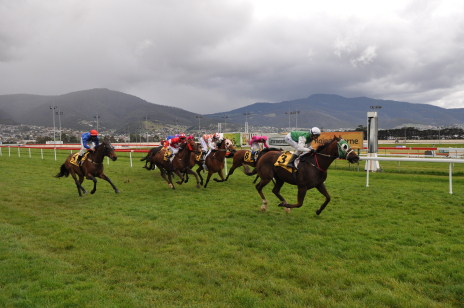 JUST moments after King Kalakaua scored an impressive win in Hobart three weeks ago coming from last on the home turn his trainer David Brunton smiled and declared the gelding a serious racehorse.

In Launceston tonight King Kalakaua gets the chance to further impress his mentor and if successful in a strong Benchmark 78 event over 1400 metres connecions may target a feature for him over the Tasmanian Summer Racing Carnival.

At his most recent outing the gelded son of Tale Of The Cat-Aloha Charm gave away an enormous start on a track that was favoring front-runners.

But despite still being last in the field of eight turning for home the gelding rattled home at the rate of knots to score by over two lengths from talented filly Smart Catch and stablemate Hell Strong that has since proven the form good by winning in Launceston last week.

King Kalakaua is having only his third start this preparation with his trainers Dave and Scott Brunton opting to space his runs.

Brendon McCoull will again partner the gelding but he wouldn’t want to give some of this field as big a start as he did in Hobart.

The main dangers appear to be fair Colony (4), Another Concerto (7), the old stager Wallis who is a last start winner over 2100m and the top weight Omega Quest that is well suited to the 1400-metre trip and has a decent second-up record.