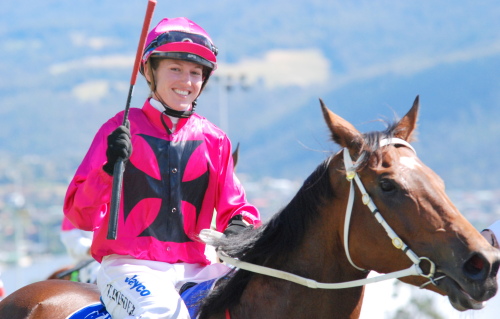 TASMANIA’S shortage of apprentices could soon be a thing of the past with young riders lining up to be a part of the state’s racing industry.

Tasmania boasts only two resident apprentices but with so many Victorian apprentice riders making frequent trips to the state it has led to some of them making the stay more permanent.

Rhagan Cross rode at her first Tasmanian meeting three months ago and she has been on loan to Devonport-based trainer Leon Wells but this week she has had her indentures permanently transferred to the astute trainer.

Cross claims three kilograms and her apprenticeship is not due to expire until October 2014.

Former Mauritius apprentice Jacques Luxe has been riding on loan to another Devonport trainer Vicki Rhind and he is in the process of transferring his indentures to Rhind.

Talented young rider Georgie Catania was apprenticed in 2010 and showed a lot of promise before cancelling her indentures to pursue another career but she has been back in Tasmania riding trackwork for some time and she could soon rekindle her apprenticeship with possibly seven Mile Beach trainer Tammy Mollross.

McShane indentured Turkish apprentice Rasit Yetimova and he has been a welcome addition to Tasmania’s riding ranks but he is contemplating adding another apprentice to the stable that is shared by him and his son Brendan McShane.

Victorian apprentice Talia Rodder said she has every intention of continuing her great association with Tasmanian racing.

Tasmania’s two resident apprentices are Ronan Keogh who is indentured to Julie Richards and Crystal Hallett who is apprenticed to Longford trainer Peter Luttrell, who also is taking on another apprentice once Hallett has served out her apprenticeship that expires next week.

Luttrell is expected to sign up Victorian teenager David Corp, 18, who was indentured to Cranbourne trainer Robbie Laing. Luttrell is hoping to have Corp signed on from June 23.