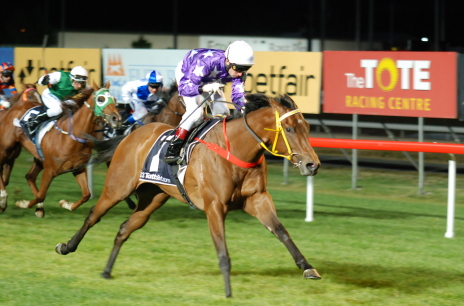 OUTSTANDING three-year-old filly Arenzano looks set to keep her unbeaten record this season intact when she tackles the $25,000 3YO Trophy over 1400 metres under lights at The TOTE Racing Centre in Launceston tonight.

Arenzano is unbeaten from four starts this time in with her most recent win in the $50,000 3YO Cup over 1200 metres two weeks ago a personal best effort.

The Barry Campbell-trained filly is yet to be tested beyond 1200 metres but her trainer is adamant she will handle the extra 200 metres with ease.

“She has learned to relax in her races and while she was forced to lead from her wide gate (10) in the 3YO Cup it was a tactical decision to go forward but over 1400 metres she should be able to settle back in the field and come from behind,” he said.

Arenzano won the 3YO Cup by almost four lengths defeating What Life Brings and Mister John with Kenjorwood a closing fourth.

However, Arenzano meets most of those that finished behind her worse at the weights by between one and two kilograms and could be a telling factor over the 1400 metres.

Mister John will be improved by his first-up run and will strip much fitter as will Kenjorwood that was having his first start for a month and only his second start since March.

What Life Brings won a maiden first-up in Launceston and he was very game in defeat in the 3YO Cup and looms as a definite chance to toppleCampbell’s stable star.

What Life Brings is a full brother to Life To The Full that won feature races in three stars and is a former Tasmanian Racehorse of the Year.

The interesting runner is Staples Gee Gee that won his maiden over 1220 metres at this track last week. The Rod Seymour-trained gelding was clearly headed in the straight by Ollie’s Gold but the gelded son of Atlantis Prince fought back and drew clear over the concluding stages to win by almost two lengths.

The 3YO Trophy is race five on the card and is scheduled to start at 8.35 pm.