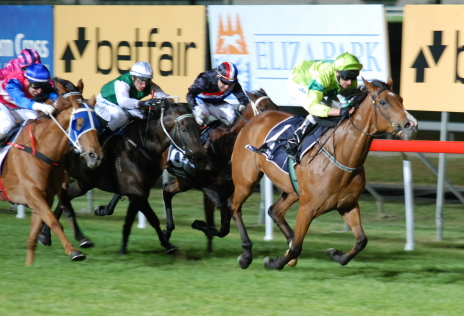 Armidale Stud celebrated what was arguably its best night at the races this season with half the card won by horses sired by Armidale stallions.

ACHAEA (HELIKE – SALCOMBE) started the ball rolling in race 2, a maiden over 1200m, with top hoop Craig Newitt in the saddle.

At only her 4th race start the attractive dark brown three year old filly made light work of her rivals skipping clear on the turn to win comfortably by 2 ½ lengths.

“Craig told us after the race that the filly will improve with age and distance, as she was still very nervy and green going to the barriers and got lost when she hit the front,” Saif Armidale boss Robyn Whishaw.

The filly is raced by the Armidale Stud Syndicate and was offered at the Magic Millions Tasmanian Sale but did not attract a bid.

Achaea is trained by David and Scott Brunton who purchased the full brother to the filly at the 2012 yearling sale.

Armidale has a half brother by leading Tasmanian Sire SAVOIRE VIVRE to be sold at the Magic Millions Sale in Launceston on 14th February.

The feature race of the evening, the Newmarket Handicap, attracted a capacity field of 14, with no fewer than five of these carrying the Armidale W brand.

As always it was a helter skelter affair with plenty of hard luck stories.

The lone interstate raider, It’s Crunch Time, prevailed but only by a very narrow margin over the fast finishing Armidale reared DREAM FLYER (SAVOIRE VIVRE – UNAMAH) who would have won if the race had been one stride further.

SAVOIRE VIVRE progeny have been winning frequently and SH’BOURNE SPIRIT (SAVOIRE VIVRE – RIVER DOLL) kept the ball rolling for her sre by winning the Class 1 over 1200m for trainer Bill Ryan.

Trained at Devonport by Leon Wells, this 4 year old is leased out by her owner breeder Mr Tony Shadforth from Hobart.

She is the last foal from his good broodmare BLACK CENT. Tony is breeding from a daughter of BLACK CENT – LULUANNA, and she has a lovely strong TOUGH SPEED colt at foot this season and is back in foal to TOUGH SPEED.

Armidale will offer a quality HELIKE filly from LULUANNA at the MM Yearling Sale in February.

To cap off a brilliant night’s racing SI VITE (SAVOIRE VIVRE – DON’T BABBLE) won the final race over 1600m from another Armidale bred horse HELL STRONG (TOUGH SPEED – GEHENNA) with only a short half head separating the two on the line.

GEHENNA has a strong SAVOIRE VIVRE colt catalogued in the MM Sale.