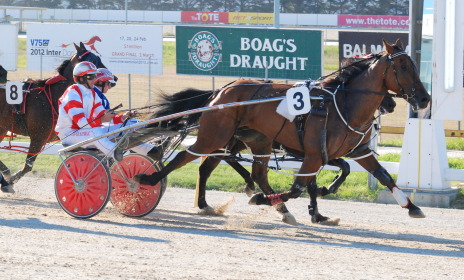 Reallyimaterminata, affectionately known as “Arnie” by his connections, won his third race on Australia Day two years ago.

But a spate of injuries varying from hoof problems to a broke pedal bone forced the gelding to be off the scene for about 18 months twice during his career that began with a win at his second race start as a two-year-old in 2006.

Last Sunday night’s win was full of merit given the gelding has been out of the winner’s circle for so long.

Campbell had Reallyimaterminata settled worse than midfield in the one-out line and forced to make a move at the bell in the three-wide line.

But when Campbell called on his charge for the supreme effort the gelding dug deep and ground down the leaders in the home straight to go on and defeat Bonfirenite by a metre with Villify 2-1/2 metres away third.

Listen to what trainer-driver Justin Campbell had to say about Reallyimaterminata’s overdue win – click here.