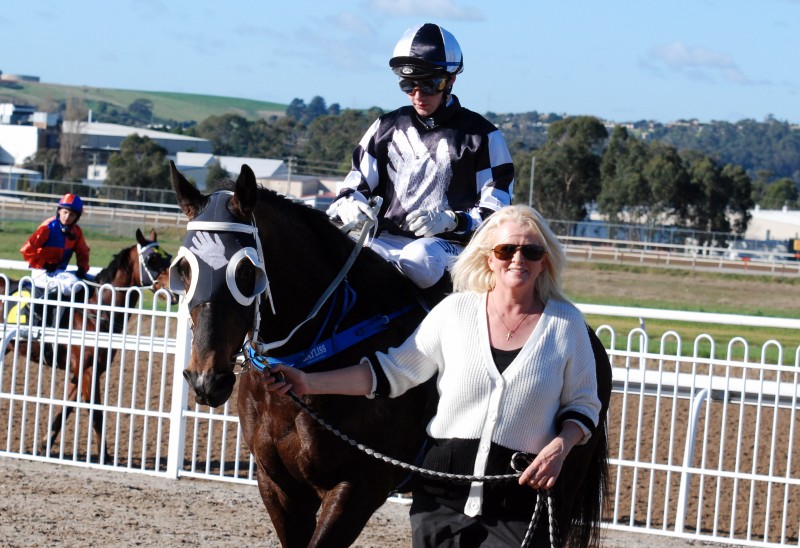 MONICA RYAN prepared her first winner as a trainer when Smartie Artie stormed home to take out the Hygain benchmark 62 handicap over 1350 metres at Devonport last Saturday.

It was a long overdue win for the daughter of Bill and Mary Ryan who are talented trainers in their own right.

Bill has one of the best strike rates in Tasmania and Mary, who no longer holds a trainer’s licence, also was high up on the strike rate chart when she was training.

“I’ve had pretty good teachers in Mum and Dad but sometimes it’s been hard living up to expectations that might be set by people,” Ryan said.

“It is great to finally get a winner and this horse is definitely overdue because he has been unlucky not to have won well before now.”

“The only disappointment is that my daughter (Karly) was not here to see me get my first winner as she had another commitment,” she said.

Smartie Artie was a victim of circumstances at three of his four previous outings but with Victorian apprentice Jake Bayliss aboard the gelded son of Artie Schiller let down brilliantly in the home straight to score comfortably from Geegees Martini and Royal Beluga.

It was the first leg of a treble for Bayliss who also scored aboard Sid The Sloth and Big Time for Spreyton trainer Adam Trinder who also prepared a treble. His other winner was Koutoufides ridden by Hayley McCarthy.

Bayliss is unlikely to return to Tasmania in the very near future as his mentor Mick Kent is keen for home to ride out his country claim in Victoria as he only has eight more wins to go before he loses that country claim.