Ashwood on the mend 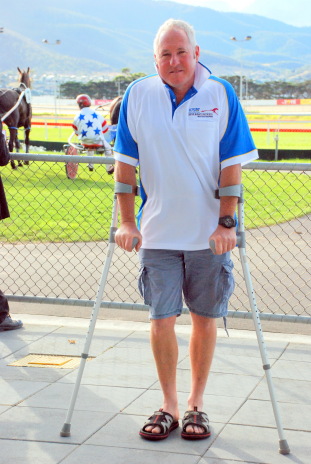 TALENTED harness racing trainer-driver Rodney Ashwood is back on his feet following a horror race fall that had the potential to render him wheelchair-bound for the rest of his life.

Ashwood suffered a fractured spleen and spinal damage when he was catapulted from the sulky of Public Expectation in a three-horse fall at Tattersall’s Park in Hobart last month.

The popular horseman spent over a week in intensive care before being transferred to a general ward where he remained under constant supervision for over a week.

He suffered spinal concussion and doctors were not sure of the extent of damage until most of the bruising and inflammation had subsided.

Fortunately for Ashwood the prognosis is good and while he is not completely out of the woods, he is expecting to return to the sulky later this year; in the meantime Ashwood requires the use of crutches for at least another month, depending on how quickly the fracture heals in his pelvis.

Also injured in the fall were trainer-driver Nathan Ford (Innasbrook) , who suffered a dislocated shoulder and novice driver Adrian Collins who was hospitalised with internal injuries including cracked ribs as a result of his horse (Hell Fire Boy) rolling on him.

Ford was back driving three weeks after the fall while Collins expects to resume driving at New Norfolk on Saturday.

Listen to what Rodney Ashwood had to say about the fall and his immediate future – click here.