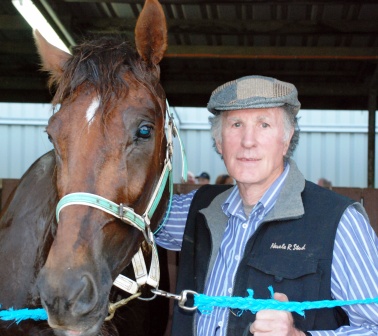 VETERAN harness racing reinsman Ken Austin broke a long drought on Sunday night when he drove his first winner on the Launceston circuit in five years.

Austin partnered the six-year-old entire Deejay Bromac to an impressive win in the fourth heat of the Allen Williams Memorial over 2200 metres.

“That’s my first winner up here since won on Lilli Vanilli and that was some time back,” Austin said.

Lilli Vanilli won for Austin in August 2005 so it is well over five years since he made it back to the winner’s enclosure at Mowbray.

Deejay Bromac was sent out an outsider at 20-1 but scored like an odds-on chance.

“H e has a bit of gate speed and he was able to use that tonight to his advantage,” Austin said.

“He’s now qualified for the Allen Williams Memorial final at Devonport and his chances in that r will probably depend on the draw.”

“He brushes his knee a bit so it will depend on how he handles the tight Devonport track and everything probably hinges the barrier draw,” he said.

Deejay Bromac is trained by John McArdle whose brother Bob McArdle was one of the founders of Nevele R Stud in New Zealand.

It was only Deejay Bromac’s second win in 27 starts with his previous victory coming in Hobart last September when also successful at big odds ($20).

Deejay Bromac flew the gates and held the front but Austin handed up when Little Bit Feral sizzled around the field 1600m out.

But when Little Bit Feral broke stride with just over a lap to go Austin was able to find a gap inside the galloper to wrest the lead and was never headed on his way to a 2-3/4 metre win over another outsider Our Last Knight.

“I couldn’t believe my luck when the other horse galloped and I got through on his inside.”

“It was nice to get a bit of good luck instead of the bad luck I’ve e had recently,” he said.