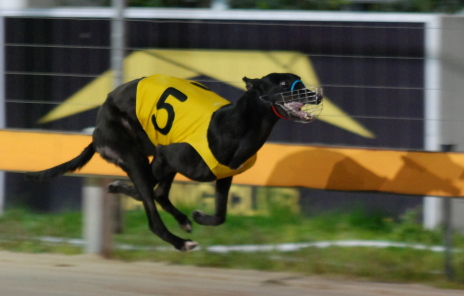 VICTORIAN owned middle distance bitch Back Page Lead has earned a trip back to her home state with a brilliant all-the-way win in the Greg Fahey Middle Distance Championship at Tattersall’s Park in Hobart last Thursday night.

Back Page Lead set up her win by beginning brilliantly from box five to find the fence leaving the first turn and then set up her win with a scintillating second split.

The Mick Stringer-trained bitch went on to score by over two lengths from the fast-finishing Collyn Tiger with Intense Suspense the same margin away third.

It was the bitch’s seventh win from her past eight starts and her sixth from seven tries on the Hobart circuit.

“She is going super at the moment, in fact I couldn’t be happier with her,” Stringer said.

“She will go back to Victoria for a 600-metre heat and final series at The Meadows in a fortnight.”

“Provided she still qualifies for that series that’s the way we’ll go but even if she doesn’t (qualify) there’s another series not far away,” he said.

The bitch has won at The Meadows and that’s another reason why Stringer is keen to get her back to the venue.

Back Page Lead (Brett Lee-Wave To Tammy) has really turned the corner under the Stringer regime of training.

“She is beginning better these days and it is amazing what a bit of confidence will do for a dog.” he said.

“She had a cou9ple of soft wins and that really lifted her confidence.”

“She is such a clean-winded chaser and she is absolutely loving what she’s doing these days,” he said.

Back Page Lead is owned in Melbourne by Geoff Slattery who has been sending dogs to Stringer on a regular basis over the past year.

The bitch has an outstanding record in Tasmania of 11 wins and four minor placings from 23 starts for $16,500 in stakes.

Stringer says he will most likely aim Back Page Lead at the state heats of the National Distance Championship.

“She is going so well that the extra 110 metres should be a problem. She has a great record on this track and provided she can handle the extra distance I se no reason why she wouldn’t be very competitive over the 709-metre trip,” he said.