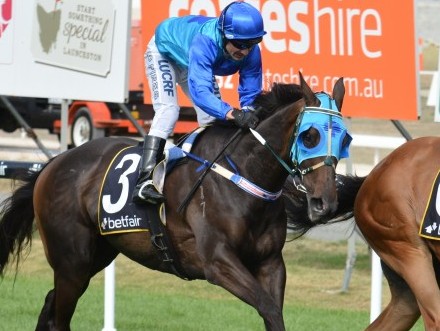 STAR Tasmanian stayer Banca Mo produced his most courageous performance to emerge triumphant in the $350,000 listed Mornington Cup over 2400 metres at Mornington in Victoria today.

It was a great result for the gelding and his trainer Scott Brunton who was reduced to tears as he watched his stable star deliver the knockout blow to a star-studded line-up.

“I couldn’t speak at the presentation because I was in tears,” Brunton said.

“It was just more tears of relief than anything else because we were all hoping to have him at his peak for the Hobart and Launceston Cups but he missed that race as a lead-up and it threw it all out of whack.”

“Then we ran into Genuine Lad in the Launceston Cup and it’s a shame that he wasn’t able to get here for the race today but we did and we won and I’m rapt.”

“I’m sure they underestimated the Tasmanian but that’s ok but he just showed them what he’s made of today,” Brunton said.

Banca Mo showed tremendous early speed to be settled second from his wide barrier (15) soon after the start and he travelled smoothly with Dean Holland in the saddle to settle second behind Entirely Platinum that set a solid tempo while Big Memory and Gamblin’ Guru settled third and fourth respectively.

Holland called on Banca Mo to extend at the top of the home straight but when Big Memory emerged he looked set to forge past the Tasmanian with Gamblin’ Guru, Don Doremo, Wish Come True and Akzar all making their runs and threatening to win.

But Banca Mo dug deep when it counted and in the end he was drawing clear of Big Memory on the line to defeat that horse by almost a length with Don Doremo third in advance of Wish Come True.

Brunton said Banca Mo would stay in Melbourne for a couple of days and then head back to Tasmania for a well-earned spell.

Banca Mo’s owner Mandy Gunn, who purchased the gelding at the Tasmanian Magic Millions Yearling sale for only $2100, was also in tears as she watched her star galloper return to the unsaddling enclosure.