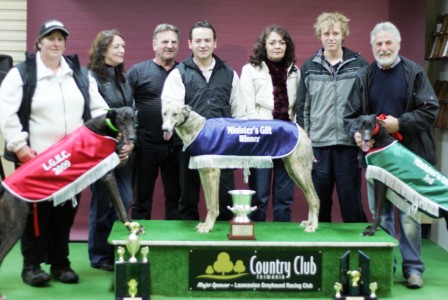 IT isn’t often that a trainer will take having an odds-on favourite being beaten in a feature race lightly but for Shane Whitney the result was bitter-sweet in the final of the Minister’s Gift in Launceston on Monday night.

Whitney’s smart bitch Crime Fighter started the $1.80 favourite and made the most of the inside box by leading comfortably to the first turn and she still had a handy margin turning for home.

Crime Fighter is owned by Whitney but he also trains Bandit’s Mistake for his mother Cheryl Whitney.

Bandit’s Mistake (Elite State-Chinatown Babe) was sent around a $5.80 chance but the way he went about scoring a career-best win, most would have thought he was the odds-on favourite.

It was Bandit’s Mistake’s first start on the Launceston track which is probably why punters rallied for his kennel matte that had three wins and two placings from eight previous attempts.

But despite it being his first try in Launceston he stopped the clock at 29.86 which was low flying compared to times recorded recently on the circular circuit.

It also was Bandit’s Mistake’s fourth win from his five most recent starts and he gives the impression he could be more impressive over longer distances.

“When Crime Fighter led I thought she’d be hard to beat but when Bandit’s Mistake was so close going down the back I knew he’d run her down because he is such a strong dog,” Whitney said.

“He gives me the impression he’ll get over more ground later on so I’ll try him over 600 metres and go from there.”

“But while he’s racing so well over the 515m or thereabouts I’ll keep mixing his distances,” he said.

The Minister’s Gift was introduced six years ago by former Racing Minister Paul Lennon and with $10,000 on offer to the winner, any wonder it is a much sought after prize.