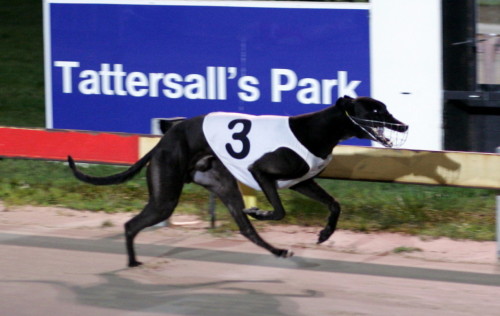 MASTER BART may only have won two races but his latest effort in a heat of the Minister’s Gift in Hobart last night was enough to suggest the penny may have finally dropped.

Master Bart had notched only one other win from 21 starts but the way he dispensed with the in-form Dilston Gold proved he has finally come of age.

The Gary Johnson-trained dog began well from box seven but not fast enough to prevent Dilston Gold from crossing from eight to find the front before they hit the top turn.

Dilston Gold kicked on the home turn and put two lengths on Master Bart but Johnson’s dog was able to find another gear and went on to defeat Dilston Gold by a length with Camdale Wolfe a distant third.

Master Bart was third to Buckle Up Man in his first-round Minister’s Gift heat so the win in round two took his points tally to 17, which was enough to secure him a berth in the final in Launceston next Monday night (October 26).

The Minister’s Gift final is made up of the top eight point-scorers from the two rounds of five qualifying heats held at Devonport and Hobart.

Fourth was allocated four points, decreasing by one through to seventh with no points awarded for last.

Master Bart stopped the clock at 26.37, which was the second-best time of the round two heat winners.

It was similar to his only other win which was at Devonport where he sizzled over the 452 metres in 26.29, scoring by almost 14 lengths.

Dilston Gold won his first-round heat so his second put him on 19 points for a guaranteed berth in the final.

He has drawn box seven in the final, which will suit, while Master Bart will carry the blue vest.

First round heat winner Buckle Up Man clinched his final berth when he chased home Callamac Lad in their heat last night.

Callamac Lad made every post a winner on his way to a convincing 3-1/2 length win over Buckle Up Man with the winner recording a best-of-night 26.28

Callamac Lad fired from the box like an arrow and had the race in his keeping by the top turn.

However, Callamac Lad has drawn box six in the final and will need to fly the lids to be any sort of chance on the Launceston circuit.

Buckle Up Man has drawn box three in the final.

Big Zeus secured a final berth with seconds in both of his heats.

The Butch Deverell-trained dog chased home Dilston Gold in his first heat and last nigh he finished two lengths in arrears of Rulla Shaw, from the Gary Johnson kennel.

Rulla Shaw crept into the final with an opening round fourth and a strong win last Thursday night.

It was a tough win but his time of 26.52 suggests he might struggle to win the final.

Crime Fighter made his way to the final with an opening round win and a second in last night’s heat behind Where’s Ned that missed out on the final by a point.