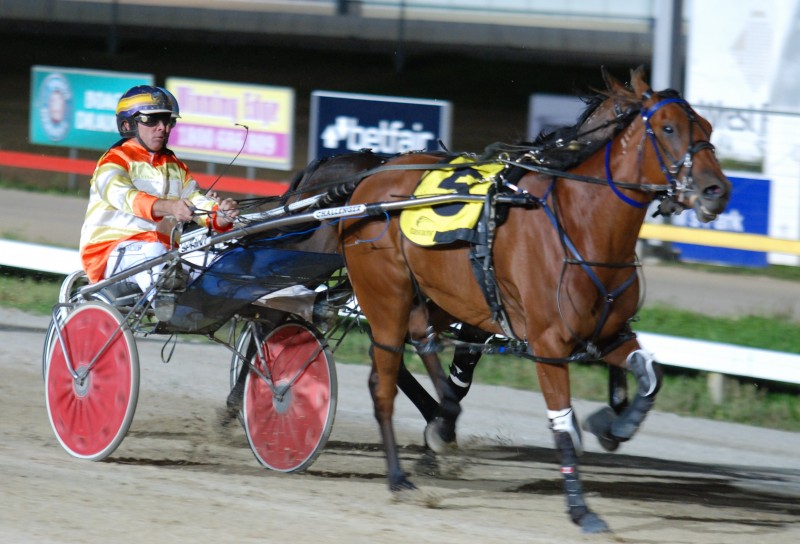 STAR Tasmanian harness racing filly from last season Barynya proved why she probably should be contesting next month’s Ladyship Mile by scoring a record breaking win in the Charlton Cup in Victoria last Sunday.

With experienced Victorian driver John Caldow in the sulky, Barynya demolished a strong field in the Cup and clocked a sizzling mile rate of 1.56.5 which carved 3.3 seconds off the previous best mile rate.

The Dick Eaves-trained four-year-old mare cruised to the front early in the race and was never seriously threatened to go on and score by 2.6 metres from another Tasmanian-bred star Villagem with former multiple Charlton Cup winner Uncle Wingnut 2.5 metres away third.

Barynya was brilliant last season winning the Tasmanian and Victorian Oaks included in her 10 wins from 15 starts.

She also clinched four minor placings, ending her three-year-old season with a game second in the Breeders Crown 3YO Fillies final behind Just Cala.

Eaves entered Barynya first-up in the Group 3 Harness Breeders (Vic) Ladyship Cup at Tabcorp Park Melton, which was one of the preferred qualifying races for the Ladyship Mile that is considered the most prestigious mares’ race in Australia carrying Group 1 status.

Unfortunately driver Rohan Hillier was a victim of circumstances in that event and the mare finished near last, beaten about 17 metres but not knocked about over the concluding stages.

Unfazed by the first real blemish on her race record connections nominated her for another Ladyship Mile qualifying race at Menangle last Saturday week but owner Lloyd Whish-Wilson explained how that turned sour.

“We entered her for the qualifying event at Menangle last Saturday week, believing that with her high points tally for her outstanding form in last year’s major 3yo events, and allowance for the interference in the Ladyship Cup at Melton, she would automatically get a start,” Whish-Wilson said.

“However HRNSW officials balloted her out, in their words because she did not have form against older horses.”

“When I contacted them (HRNSW) I was told they did not work on the points for performance formula that Victoria and Tasmania use, and did not consider her faster times and higher prize-money won as sufficient justification to place her in the front of older mares,” he said.

The Ladyship Mile field has been finalised and will be run at Menangle on Sunday week (March 1).

Baryna was named Australian 3YO Filly of the Year last season and while she did miss a place in that Ladyship Mile qualifying event there is no doubt she would have started one of the favourites had she been given ample opportunity to find a way into the race.

The winners of each of the selected qualifying events are guaranteed a start in the Ladyship Mile.

However, the conditions of the race then dictate that the balance of the field is selected from mares that competed in qualifying races held in New South Wales, one of which Barynya was denied a start.

If Barynya’s lack of form against older horses was the reason for her being balloted from the qualifying race at Menangle then she certainly proved that to be misguided by thrashing her older rivals in the Charlton Cup.