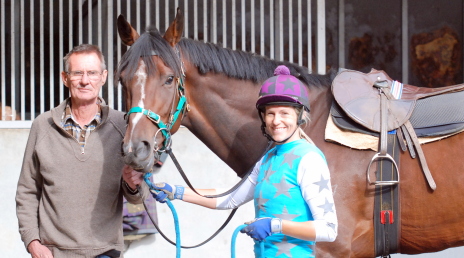 ONE of last season’s better performed three-year-olds Barysh Quest is on the comeback trail an will make his return to racing in Tasmania at The TOTE Racing Centre in Launceston next week.

The Gary White-trained gelding will line up in the www.tattsbet.com.au Stakes over 1200 metres in what will be one of two feature races on the eight event program.

Barysh Quest began his campaign in Vitoria in September but after four failed attempts he was sent back to Tasmania for a crack at the weight-for-age races.

Before leaving the state he won the Hobart Guineas (2100m) and was a luckless second in the Tasmanian Derby before finishing out of a place in the George Adams weight-for-age last February.

He has been back in work at White’s Brighton stables for the past eight weeks and he looked in great shape during a track gallop at Brighton on Tuesday.

“We have to start somewhere and the tattsbet.com.au stakes is as good a race as any to kick off his campaign,” White said.

“We are aiming to having him at his peak for the George Adams (1600m) weight-for-age later next month and the Thomas Lyons (1400m) before that but he should be competitive at his first start next week,” he said.

Barysh Quest was purchased by Launceston restaurateur Stewart Hallam to be raced by the Lobsters For Legends syndicate that is named after the annual function on Launceston Cup eve at his Hallam’s Seafood Restaurant in Park Street Launceston.