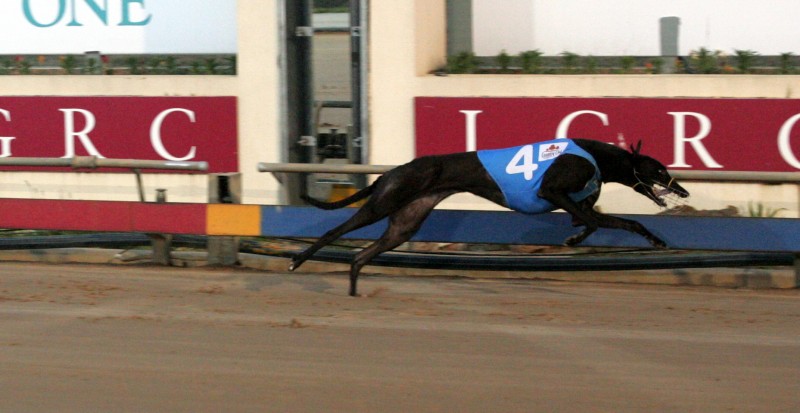 AFTER being beaten in the Hobart Thousand final and the Devonport Cup Tasmania’s best greyhound Rewind had his Launceston Cup campaign cut short in the opening heat at The TOTE Racing Centre last Monday night.

Rewind led from box six and sped clear leaving the first turn but when the Graeme Bate-trained Xylia Allen moved alongside the champ turning for home she quickly put the end result beyond doubt.

Xylia Allen ‘broke the track record in the process. clicking a sizzling 25.35 seconds over the 515-metres to carve .05 seconds off the previous best set by Damek in June 2010.

It was an awesome performance and given the ease with which she dispensed with Tasmania’s champ she will start a short price favourite to win the final next Monday night.

Bate missed getting a runner in last year’s Hobart Thousand final but he is making amends in Tasmania.

He began by making it successive Devonport Cup wins when Allen Benji delivered the gods in the Group 3 event last month.

He entered seven in the Launceston Cup and ended up with five finalists.

As well as preparing Xylia Allen to win her heat in track record time he also has Schrodder Bale, Fully Advanced, Xenos Bale, and Imry Bale into the Group 2 final on Monday night.

Another Victorian trainer Peter Hunt will be represented by Pop’s Max that ran down Lika Whisper to win his heat convincingly.

The remaining two spots were filled by local dogs.

Leith trainer Gary Johnson will be represented by Justin’s Dream that ran home strongly to score from Tadmore Dunoon and race leader Fulande while leading trainer Ted Medhurst has Rob Pines through to the final.

Rob Pines caught race leader Everywhere near the home turn and then denied bate a sixth finalist when he held out Irma Bale that ran on powerfully over the concluding stages.

Rewind is first reserve in the final with Irma bale the second reserve.

Xylia Allen has drawn box five in the final and while it is not an ideal draw she would only need to mirror her heat effort to be the one to beat.

Her kennel mate Fully Advanced carried the white vest in his heat and has replicated that in the final.

Fully Advanced needs to improve on his time of 25.72 but it is possible at his second attempt on the circuit.

Another of the Bate finalists Schrodder Bale has drawn ideally in box one and only needs to step cleanly to be a bug chance of upsetting the new track record holder.