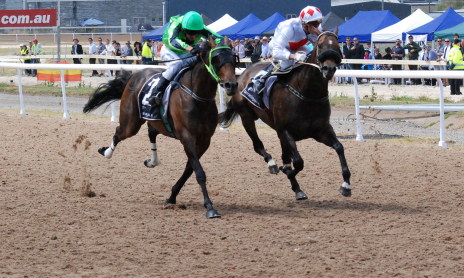 WELL bred three-year-old filly Bazanne broke her maiden status in style on her home track at Tapeta Park Devonport today scoring an effortless victory in the A1 Tree Services Maiden Plate over 1150 metres.

Bazanne, prepared by Barry Campbell at Spreyton, landed just off the pace set by Kirstie’s Rose and jockey Anthony Darmanin was able to settle the filly in a handy position and was poised to pounce when they turned for home.

The West Quest-Deb’s Pride filly burst clear at the top of the home straight and went on to score by 1-1/2 lengths from Wakefield with Asil Anom four lengths away third.

Bazanne is owned and raced by Barry and Diane Bowerman in partnership with Bob and Anne Howlett.

She was bred by Bob Howlett from Deb’s Pride that has been a good producer since being retired to stud 11 years ago.

Deb’s Pride has delivered seven foals with her first Spirit Of Archie, a West Quest gelding a winner of seven with four minor placings from 25 starts and almost $65,000 in stakes.

The mare’s other winners have been Mystic Millie (3 wins), Dash Of Pride (4) and Juan (5) that is still racing and is in the care of John Hill who bought the horse at the 20076 Tasmanian Magic Millions Yearling sale.

Bazanne gives the impression she will be even better when she gets over more ground, probably up to 1600 metres .