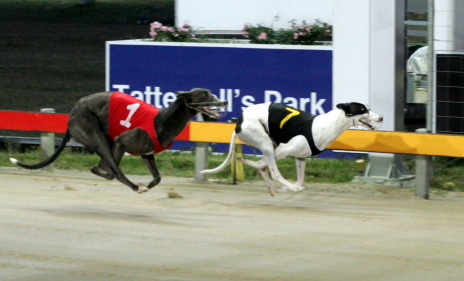 OWNER, breeder and former trainer Gerard “Bear” Allford celebrated a double last week when two from a litter he bred and owns saluted at both ends of the state.

Bearville Boy, prepared at Longford by David Crosswell, scored a three-length win in a juvenile over 452 metres at Devonport last Thursday week.

Bearville Boy began brilliantly from box four to lead clearly at the top turn and he went on to win by over three lengths from Wynburn Voodoo with Chineese Jet over a length astern.

Bearville Boy was sent out one of the favourites but in Hobart two days later Bearville Phil, trained by Gary Johnson, saluted but at big odds and at the expense of the shortest priced favourite on the program – Beaudine ($1.04).

Bearville Phil began well from box seven and had enough pace to cross the field and hold sway at the top turn while Beaudine missed the start and was last when they settled.

Allford’s dog extended his lead in the home straight and had a seven-length margin over Beaudine on the line.

Given the manners possessed by both dogs they look capable of winning at least a few more.