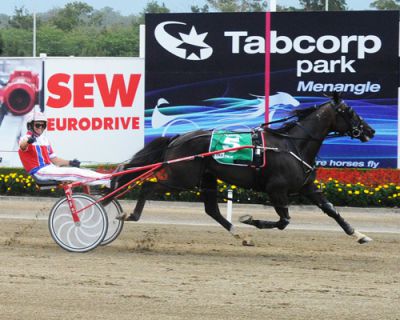 STAR Tasmanian-owned and bred pacer Beautide is likely to head to the Group 1 Len Smith Mile after obliterating his rivals in the 2015 Inter Dominion final at Menangle yesterday.

Beautide toyed with his rivals in Australasia’s premier event over 3009 metres scoring by 14 metres and in a similar mile rate (1.55.8) that he delivered to win the race last year, which was a track record of 1.55.5.

It was only his third start this time in and given he has had such a short preparation leading up to the inter Dominion series Rattray expects the gelding to continue racing in the short term.

Winning back-to-back Inter Dominions elevates Beautide to legend status and arguably the best Tasmanian-owned and bred pacer to have ever contested the Inter Dominion.

What he has achieved in the space of a year sets him apart from any other Tasmanian-bred standardbred.

In winning consecutive Inter Dominions Beautide joins an elite fraternity that have achieved the goal and one more in Perth, Western Australia later this year would see him be one of only four to accomplish the feat.

The next Inter-Dominion will be held in WA in November and Rattray says the half-mile track at Gloucester Park holds no fears for his stable star.

Listen to what trainer-driver James Rattray had to say after Beautide’s brilliant Inter Dominion win at Menangle yesterday.