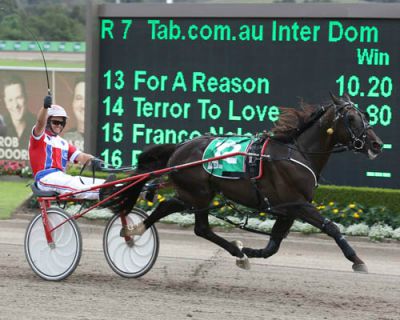 STAR Tasmanian pacer Beautide sounded a warning to his rivals that he is back to his best and ready to defend his Inter Dominion crown with an emphatic win kin a ID heat at Tabcorp Park Menangle last night.

With his trainer James Rattray in the sulky, Beautide began well from his front row gate and after facing the breeze foe a short way he rolled to the front and from there on in gave his rivals a pacing lesson.

Beautide was backed in to start the $1.70 favourite but there also was strong support for Suave Stuey Lombo that firmed dramatically close to race start time but he did himself no favours when he galloped as the starter released the field.

Suave Stuey Lombo’s driver made a midrace move to send his charge around the field to face the breeze but when he allied the pressure to the gelding nearing the home turn he failed to respond and faded in the home straight to finish last.

Rattray had Beautide on automatic pilot for the last lap and when For A Reason emerged to stake his claim and moved alongside the reining Inter Dominion champion the Tasmanian -owned and bred gelding slipped into another gear and forged clear to win easily without being fully extended.

He hit the line 6.6 metres clear of For A Reason with Monifieth over 11 metres astern and just in advance of Teo Enteo with the first four across the line qualifying for a berth in the final on March 1.

Rattray was delighted with the result.

“He hasn’t hade the perfect preparation for this series but I am confident he’s back to where he needs to be to successfully defend his title,” Rattray said.

Beautide finished second in the Miracle Mile to Christen Me at the end of November but his only other outing leading up to last night’s Inter Dominion heat was in the Victoria Cup at Melton in which he finished eighth of 12 but Rattray wasn’t disturbed by that effort.