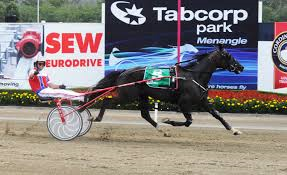 STAR Tasmanian-owned and bred pacer Beautide will start a short price favourite to win his second Len Smith Mile courtesy of a favourable front-trow draw in the $100,000 Group 1 race over 1609 metres on Sunday.

Beautide has drawn barrier four which should enable trainer-driver James Rattray to secure a good spot early in the race and possibly lead if he so desires.

The Tasmanian bred and owned 7YO gelding has dominated Menangle feature races over the last two seasons and a win in the Len Smith Mile will take his tally of Group 1 wins at that track to six, only one behind Smoken Up.

Smolda’s only Australian start this preparation was a win in the $51,000 Renshaw Cup at Penrith last Thursday (16 April).

The Len Smith Mile field is an indication of the success of the Rattray Family Trust breeding program.

Bettor Draw was sold to Queensland owners two years ago after winning 12 races in Tasmania.

The 7YO gelding has gone onto win another eight races at Albion Park and one at Menangle and the majority have been in quality fields.

Bettor Draw shares the Albion Park track record mile rate of 1:54.0 for 2138 metres with Avonnova while Beautide holds the world record of 1:55.5 for 3006 metres at Menangle.

Apart from Beautide and Bettor Draw, four other Tasmanian bred or owned horses have accepted for the Menangle meeting.

Villagem (R9 N8) will compete in a $21,000 FFA for horses that were balloted from the Len Smith Mile.