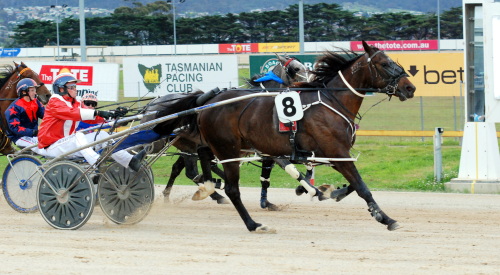 TALENTED three-year-old confirmed he is on target to contest the features during the upcoming Tasmanian Christmas carnival with a brilliant win in the Betfair 3YO over 2090 metres at Tattersall’s Park on Sunday night.

Beautide, better known as a bold front-runner, came from last on the home turn to score a runaway win over Wundababe and Winewomenandsong.

It was arguably the gelding’s most impressive win and his second from only two starts this preparation.

Beautide was one of the state’s better two-year-olds last season winning the $30,000 Betfair Sweepstakes final and he won a Dandy Patch heat before finishing unplaced in the final after copping interference.

The Bettor’s Delight gelding’s trainer Barrie Rattray was upbeat about his latest performance and confirmed he was doing everything expected of him.

He was allowed to drift back to the rear of the field from his inside second-row draw by driver Gareth Rattray and he remained near last until well into the back straight the last time.

He was still last as the leaders wheeled around the home turn and straightened for the long run home.

But when Rattray called on his charge for the supreme effort he powered home to score by two metres from the grey filly Wundababe with Winewomenandsong almost a metre astern and just in advance of the fast-finishing Really Western..

Listen to what trainer Barrie Rattray had to say about Beautide’s latest performance – click here.