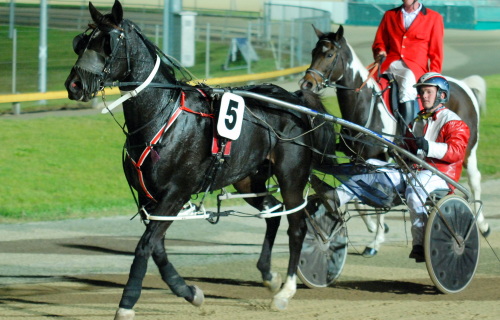 QUALITY three-year-old Beautide made an impressive return to racing in Hobart last night with a strong win over archrival Quastor Centurion in the $10,000 Betfair Prince Of Pace over 2090 metres.

The race was billed as a match in two and the three-year-olds never let the punters down.

Beautide (Gareth Rattray) led from gate five while Quastor Centurion (Erin Hollaway) sped across from gate seven to sit at the leader’s wheel.

The pair raced in that order to the 500-metre peg where Hollaway called on her charge to apply the pressure and at the top of the home straight it looked as if Beautide’s condition might give out.

But under strong driving from Rattray, Beautide refused to wilt and fought back to score by almost a metre from Quastor Centurion with Drifting West, that trailed the leader throughout, 5-1/2 metres astern.

Beautide’s trainer Barrie Rattray was thrilled with the win and suggested the future looks bright for the rest of the season given his charge went into the race without a trial.

Listen to what trainer Barrie Rattray had to say about Beautide’s win – click here.