Beautide proves he is the best 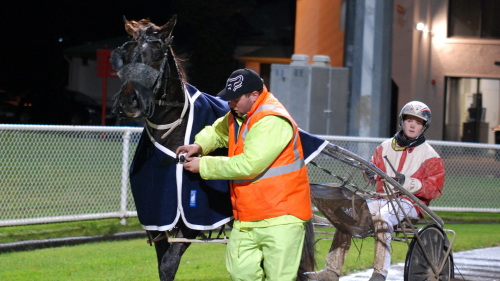 BEAUTIDE confirmed his status as Tasmania’s best three-year-old pacer when he outgunned a quality field to win the $30,000 Roberts Equine Supplies Globe Derby Stakes final over 2200 metres at The TOTE Racing Centre in Launceston on Sunday night. Beautide (Gareth Rattray) settled worse than midfield in the one-out line from his second row draw while his archrival and race favourite Quastor Centurion ($1.80) worked around the field early to face the breeze outside of the leader Benji Vee.

As the bell sounded to signal the final lap Rattray eased Beautide three-wide to make his move but he kept a firm hold of the reins as the gelding crept into the race.

Erin Holloway released the brakes on Quastor Centurion turning for home and he slipped two metres clear but Beautide loomed large and when Rattray called on his charge for the supreme effort he proved too strong over the final stages to score by a half-metre from Quastor Centurion with Johnnyace a closing third.

Beautide (Bettors Delight-Gorse Bush), prepared by multiple premiership-winning trainer Barrie Rattray, has won nine of his 10 starts this season with his only blemish being a fourth in the Tasmanian Derby in February.