Beautide voted Horse of the Year 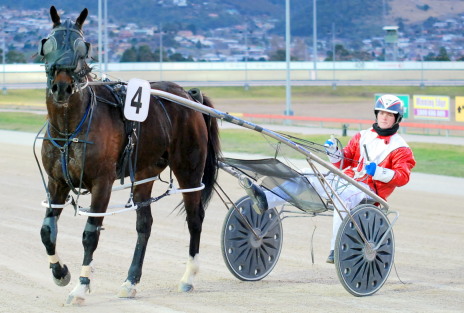 STAR pacer Beautide capped a great 2010-11 season by being named Tasmania’s horse of the year.

The now four-year-old was crowned at a special gala function at Wrest Point Casino in Hobart last night (Friday) where the Barrie Rattray-trained gelding also was named the state’s best three-year-old from last season.

He captured the $30,000 Globe Derby Stakes, along with the Tasmanian Guineas, V75 3YO Championship and the Prince Of Pace, all of which carried prize money of $10,000.

The gelding also finished close up in the Tasmanian Derby, beaten less than two metres from the winner.

The Christian Salter-trained Cloudy Delight was named Tasmania’s best 2YO filly and she was a unanimous choice with 40 votes ahead of Play Apple Tree (18) and Iden Princess (8).

Cloudy Delight won the $30,000 Evicus Stakes, $25,000 Betfair Sweepstakes and the Premier’s Blue Bonnet. She won six of her nine outings.

The top 2YO colt award was a closer encounter with the Grant Hodges-trained Lombo Leonardo earning 23 votes from the 10 judges with Betfair Sweepstakes winner Punt Road Disco close up on 21 and only one vote ahead of Hesa Prospect.

Lombo Leonardo won the $10,000 Youthful Stakes and the $10,000 Golden Slipper, which were two of his three wins from only four starts.

Points are awarded on a 4-2-1 basis with Lombo Leonardo gaining the top vote from four of the judges while Punt Road Disco and Hesa Prospect each received three top votes.

Klebnikova Leis was a clear winner in the 3YO Filly category.

The Bill Dornauf-trained filly, owned by Trevor and Marjorie Leis, earned four points from all 10 judges with Benediction a clear second from Lily Darling and Shakes Gold.

The consistent Shez Ryleymak was named Mare of the Year. She raced in three states and won four of her 11 starts including the $10,000 Shirley Hills mare’s classic on home soil and a $15,000 MO at Melton in Victoria.

Our Sir Jeckyl received top votes in the 4YO and older category and he was a deserving winner courtesy of his six wins from 16 starts that included the $20,000 Golden Mile, $10,000 Launceston Mile and the $10,000 Cannonball Charge along with an M1 race at Melton in Victoria.

Gorse Bush was again named Broodmare of the Year. She had five offspring race during last season for three individual winners that accrued 15 wins – Beautide (9), Ashkalini (5) and Acutabovetherest (1).

Last season’s industry participant awards also were meted out at the function.

Erin Hollaway was the state’s leading female drive r with 43 wins ahead of Natalie Emery on 16.

Young Fingal trainer Clinton Woods was named the Tasmanian Polytechnic Achiever of the Year. Woods, 27, took on the role of committeeman with the St Marys Pacing Club and he also raced two horses including Touchwood Bucksta that was dubbed the country cups king winning the Carrick, New Norfolk and Burnie Cups.

Woods also was an outstanding student at the 2011 Harness School.