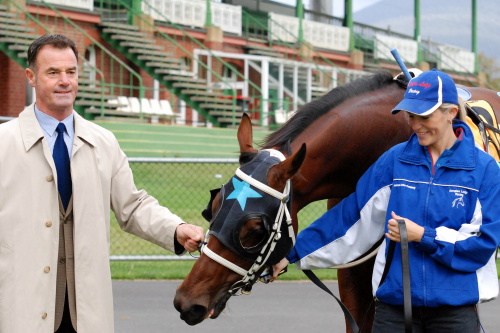 IF ever a horse deserved to break his maiden status it was the Gary White trained Begabretro that delivered the goods in the CDC Developments Tas Maiden Plate for colts and geldings three years old and upwards.

The well bred three-year-old gelding had been placed at two of his three previous outings this time in and on two of those occasions he was a victim of a bad barrier and he had no luck in running at his other start.

But with Stephen Maskiell aboard, Begabretro was given the run of the race and despite being held up momentarily turning for home he forged clear in the straight and had enough in reserve to score convincingly over the fast-finishing Speedy Seed and Gee Gees Beauty.

White said the win was deserving and overdue.

“This horse should have won before this but at least he has his maiden win tucked away and we can press on from here,” White said.

“He has a lot of natural ability and has been very unlucky at his other runs this preparation,” he said.

Begabretro is owned in partnership by the Little Syndicate and Stewart racing & Breeding Syndicate, both of which are managed by Troy Stewart who purchased the gelding at the 2009 Tasmanian Magic Millions Yearling sale.

However, White said the purchase was carried out in extenuating circumstances.

“I called Troy (Stewart) while I was at the sale and told him there was a horse he should buy (Begabretro) and we discussed what we might pay etcetera but when I tried to get back in touch with him when the horse was brought into the sale ring he was locked away in a meeting and I couldn’t get in touch with him so I bought the horse anyway,” White said.

“Thankfully Troy was pleased with what he saw and I’m confident the horse will go on and win more races,” he said.