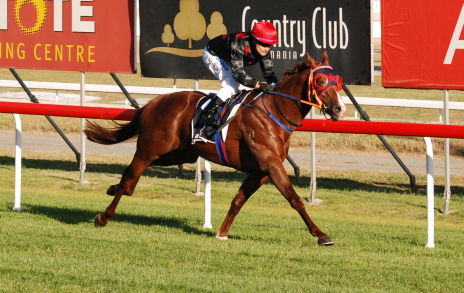 LONGFORD trainer Troy Blacker has his sights on the Tasmanian Guineas with promising colt Bel Ombre after he scored an impressive maiden win at The TOTE Racing Centre in Launceston last night (Wednesday).

Bel Ombre (Stephen Maskiell) made fill use of the inside barrier to hold the lead and when rider Maskiell called on the colt to extend at the top of the straight he shot clear and went on to score convincingly from Novaell and Staples Gee Gee.

The colt was having only his second start but had indicated on debut when fifth to Light The Candle that he may have above average ability.

“He is a very nice colt and while he opted to drive him forward and make use of his good gate tonight he is probably going to be better when allowed to get back in races and really make use of his excellent turn of foot,” Blacker said.

“We are hoping he will be even better when he gets over more ground, which is why we have targeted the Tasmanian Guineas over 1600m on January 2 but he also could be a Derby horse,” he said.

Bel Ombre (Denon-Eve In Seychelles) was bred by Terry Clarke and raced by him and a syndicate of friends including former Tasmanian Premier and Racing Minister Paul Lennon.

The colt is a half-brother to Beau Vallon (x Lonhro) but he shows more stamina that his half-sister.