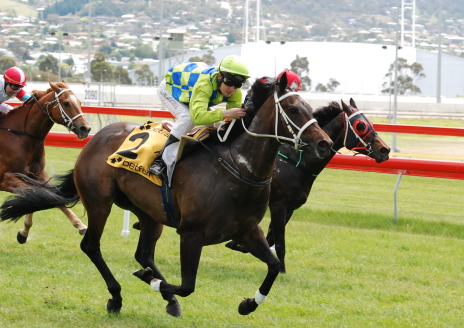 ONE of last season’s best three-year-old fillies Bel Price resumed from an injury-enforced spell in Hobart today with an emphatic win in a strong class two handicap over 1100 metres.

The Vicki Rhind-trained four-year-old cruised to the leaders at the top of the straight and after receiving one flick from jockey Jason Maskiell’s persuader she forged clear and went on to win comfortably from Beau Vallon.

It was an impressive effort given the mare looked in need of the run and her trainer Vicki Rhind admitted she was only using the race as a trial.

She had intended aiming the mare at the Newmarket handicap but a shoeing mishap set her back a fortnight so the Newmarket, to be run in Launceston tomorrow night, was crossed off the list.

It may have been a blessing in disguise as the Newmarket has become a very strong race and today’s outing well and truly served its purpose.

Bel Price (Bel Esprit-Kel Price) had six start last season for two minor placings in her first preparation in August last year followed by a maiden win and a effortless win in the 3YO Classic in February, after which she had an operation to remove bone chips in her knees.

The operation, performed by Dr Alistair McLean, was a huge success and she has shown no signs of favouring her front legs throughout her preparation.

Listen to what trainer Vicki Rhind had to say about Bel Price’s first-up win – click here.