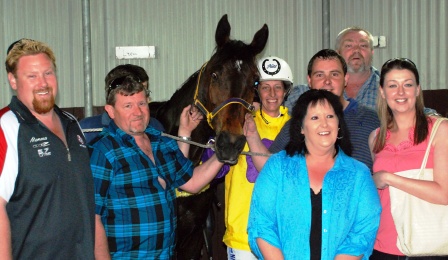 ONE of last season’s better performed three-year-old fillies Loves A Beach returned to racing with a bang in Hobart on Monday night.

The Paul Belcher-trained filly showed good early speed to fond the front fro gate two and after a short-lived challenge down the back straight the last time she burst clear and went on to defeat the fast-finishing Love My Fella by over a metre with Bad Boy Vinny a distant third.

It was the four-year-old mare’s first start since May which was a win in the $30,000 Bandbox Stakes final.

The filly has been in work about three months and looked super fit as she strolled onto the track.

Belcher is confident the mare can reach great heights this season, so much so that he has targeted the $50,000 George Johnson that is one of the feature races during the V75 Tasmania Harness Carnival next month.

Loves A Beach (Jennas Beach Boy-Perhaps Love) won four from 10 starts last season and was ranked as one of the state’s top three fillies in her age group.

Listen to what trainer Paul Belcher had to say about the mare after she won in Hobart on Monday night – click here .