Benediction still has plenty to offer 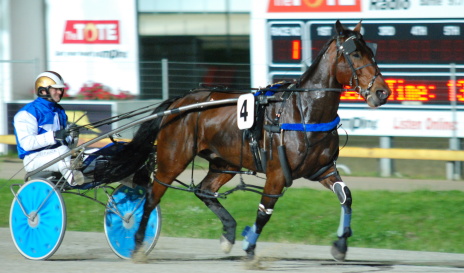 TOP harness racing trainer Barrie Rattray has maintained his opinion of former smart filly Benediction throughout her racing career but some inferior efforts and flat spots in recent times had the potential to dampen his enthusiasm.

She finished well down the track at her only two outings in Melbourne in August, finishing second last in a heat of the 4YO Breeders Crown series at Melton and finished in the same position at her subsequent start in the Breeders Crown Consolation.

But Rattray was not fazed by the results owing to the mare having contracted a virus prior to leaving the state and he maintains a belief that the home-grown mare is capable of winning more races.

In Hobart last Sunday night the now five-year-old mare proved him right by producing the goods to register her 16th career win from 44 starts.

In a small field of five, Benediction was allowed to drift back to last from her wide gate while one of her two stablemates, Bettor Draw, driven by his trainer, set a solid tempo.

But when the pace slackened Benediction’s driver Gareth Rattray sent his mare around the field to face the breeze where she stayed for the remainder of the race.

It took Benediction the entire length of the straight to gain the upper hand but that might be a touch unfair on Bettor Draw that also has been a model of consistency this time in.

Benediction clocked a mile rate of 2m.03.3 that was somewhat pedestrian given her capabilities.

She clocked a mile rate of 1m.59s as a two-year-old when victorious in the Evicus Stakes final at Tattersall’s Park in Hobart, although at three her best rate was 2m.00.7s in winning the Killarney Stud Bouquet.

But last season she recorded her best mile rate and one of the slickest over 1609 metres on the Hobart track this year clocking 1.57.8 in winning a C5-C6.

Rattray confirmed Benediction is about t embark on a stud career.

“I’m more than pleased with what Benediction has done throughout her career and she will go to stud with what I consider an impeccable race record,” Rattray said.

“She is booked in to Somebeachsomewhere so her racing career is coming to an end,” he said.