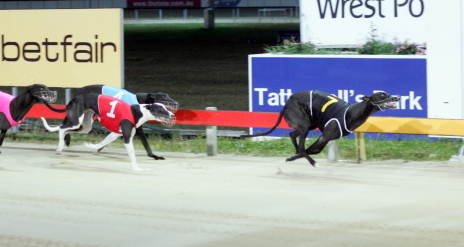 HOBART track record holder Bergermeister returned to wining form with a bang this week nothing two wins in the space of three days.

Bergermeister won in Hobart last Monday night and followed up with a near all-the-way win in an invitation over 461 metres at the same venue last night.

The dog had been sadly out of form with many pundits believing the dog might have been past his use by date but trainer Mick Stringer has been able to rejuvenate the dog that at one stage was being hailed a potential superstar.

It was his second win in the space of three days having been successful in Launceston three nights earlier.

“I don’t really know why he lost form,” Stringer said.

“He went off the boil and just seemed to lose interest and it was a matter of trying to change things around with his training regime and that’s all I could do.”

“He may have had a low grade virus but he was still good in the coat and good in the eye.”

“In the end I just kept him away from the track and freshened him up and it seems to have done the trick,” he said.

Bergermeister won well in Hobart wearing the black vest on Monday night and he carried the same vest in what was almost a mirror image performance to win three nights later.

“The field he beat tonight (Thursday) was good because it had Lika Whisper that was second in the Launceston Cup and November Digger that has been racing really well of late so there was a bit if depth in the field he beat.”

“At the end of the day I’m just glad to have him back racing keenly because while he’s in this frame of mind he’ll be competitive in anything he tackles,” Stringer said.

Bergermeister was one of the best dogs racing in Tasmania last year and Stringer admits he thought the dog had the potential to take the greyhound racing world by storm.

But it was the dog’s effort in the Group 1 Hobart Thousand final that gave Stringer an indication that all was not right with the dog.

“When he didn’t perform as I expected in the Hobart Thousand I thought that run was well below par and when he didn’t race at all well two starts after that race I knew there was a problem.”

“Like I said, I’m just so pleased to have him back chasing keenly and hopefully he can get back to where he was last year consistently breaking 26 seconds around Hobart,” he said.