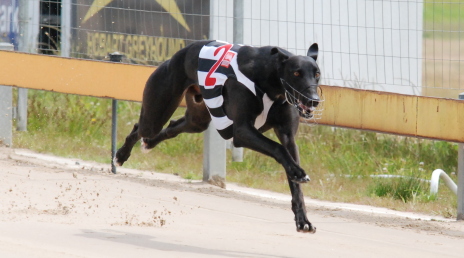 Bergermeister returned to firm in recent starts and made his way into the Thousand final with a convincing win in his heat last Thursday night and he has drawn box one in the final.

While the powerful black dog’s heat-winning time of 26.05s was shy of his 461-metre track record (25.71) that he set at the end of July, Stringer was delighted with the run and believes the dog has drawn to win the final which would give him his second success in the time-honored race.

“I couldn’t happier with how my dog has performed at his past three starts and now that he has drawn the inside alley he is a genuine chance in the final,” Stringer said.

“His time in his heat was a bit south of his best but that was probably due to it being a very late race and it was a nine-day turnaround from his previous win so all in all I was rapt with his effort.”

“He is in top shape for the final and if he jumps with them on Thursday night they will all know he’s in the race,” he said.

Stringer knows what it takes to win a Hobart Thousand having been successful with Little Spaniard in 2008 and the following year he assisted Victorian trainer Robert Britton with the preparation of Prankster that came from well back to win the Group 1 event.

This year’s final boasts five Tasmanians and of the three Victorian finalists, Melbourne Cup winner Dyna Tron is the best performed and is the likely favourite after drawing favorably in box two.

Dyna Tron won his heat in a time of 25.78s at his first try on the track and he clocked the equal fastest time of the eight heat winners.

The Tasmanian owned and bred Rewind, prepared at Bracknell in the Meander Valley region by Maurie Strickland, was awesome in wining his heat by over seven lengths at what was his first run back in the state after a successful interstate campaign.

Rewind is well suited in box seven as he has the ability to cross the field if he gains an unimpeded run to the top turn.

The connections of the winner of this year’s final will pocket $75,000