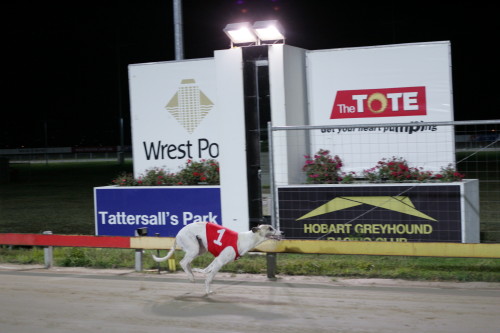 In form Stylish Bernie pushed and bullied his way through to the lead by the 461m boxes and once in front opened up to lead by 8 lengths down the back, finally cruising to a 6 ½ length victory from veteran Capetown Harry with Master Bart third.

Acton trainer Mark Sutcliffe has this son of Where’s Pedro out of Stylish Dotty flying at the moment and was confident he would perform well last night especially after Embrocadero won the race before.

At his last start in Launceston over the 600m he beat Embrocadero by 8 lengths in yet another front running exhibition.

His next task will be a three week distance series in Launceston starting on Monday Night where he will contest two round of heats over 600m and the leading point scorers will contest the Final over 720m.