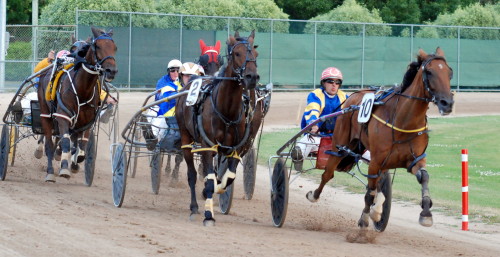 BILLABONG BERTIE made amends for a second in the St Marys Cup on New Year Day with a brilliant victory in the North Eastern Pacing Cup over 2692 metres at Scottsdale on Friday night.

It was a fitting result for the Eric Jacobson-trained five-year-old that had the St Marys Cup won everywhere bar the last stride.

Ace reinsman Ricky Duggan can take the credit for the Scottsdale win courtesy of a lightning move midrace that caught the leaders napping.

Duggan sent his charge around the field soon after the second favourite Biggernbettermax had assumed control and so fast did he accelerate the leader was unable to prevent him from crossing to take up the running.

Once in front Duggan slowed the pace slightly and then held his charge together for a sharp burst in the short home straight.

Billabong Bertie hit the line clear of George Grant that faced the breeze throughout with Biggernbettermax a closing third.

One of Billabong Bertie’s part-owners Eddie Ellerton said connections had contemplated starting the gelding in a race in Hobart on Sunday night but had been convinced by driver Ricky Duggan to make the trip to Scottsdale on the North-EastCoast.

“We have Ricky (Duggan) to thank for coming here for the cup and we are rapt,” Ellerton said.

Jacobson said the gelded son of Village Jasper is likely to have a coupler of weeks off and be aimed at some class races next month.

Billabong Bertie has been a great money spinner for his owners winning eight times and nothing 11 minor placings from 21 starts since joining the Jacobson stable.