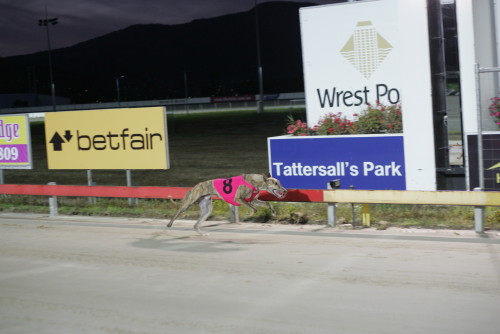 THE Group One Hobart Thousand has lived up to its rich history by providing arguably the best Final in 75 years at Tattersall’s Park tonight.

The Interstate Invaders led by Australia’s top trainer Darren McDonald has new track record holder Octane Show and Perfect Fancy in the race and will be looking to create history by training the Devonport Cup, Launceston Cup and Hobart Thousand winners all in the one year.

All Tasmanian greyhound followers will be hoping for a local victory with the two brothers Damek and Decembrist along with Octane Assassin all in with strong chances.

Damek is undefeated on the track from twelve starts here and can fly the lids if he does the roar from the grandstand will be deafening.

An inform sprinter from New South Wales he has competed at the top level in three states. Looked impressive last week with a commanding win first up on the track recording 26.18. The red is always the place to be in a Group 1 and he certainly has a solid chance. Went fast early clocking 5.15 and if he can do it again will be in the firing line.
2. Perfect Fancy (NSW) 19 starts 11-3-5 ($33,545)

Smart sprinter and middle distance performer from the Darren McDonald kennel impressive winner first up on the track recording 26.06 from the red. Nice draw in box two and a repeat of last week’s run would put him in the finish. He has loads of ability and lacks nothing on the training side of things, has solid claims.
3. Octane Assassin (TAS) 18 starts 11-2-2 ($19,340)

Tasmanian superstar unbeaten here 12 from 12 was again impressive leading all the way in 25.94 a little slower than his two track record breaking runs last month. This is his biggest test, fantastic field and box four. However if he comes out running he can certainly clock a time capable of winning. He will have a heap of local support and why not he hasn’t done anything wrong in a star studded career of only 29 starts. Has to be the one to beat.
5.Kilty Lad (VIC) 21 starts 13-3-0 ($56,050)

Extremely smart Victorian sprinter and Group 3 winner in November at Cannington, races well on both one turn and two turn tracks. Won impressively off box eight last week, but he jumps from a horror draw in five. Not without a chance but will need luck early to find a good position perhaps a place chance.

Second finalist for Darren McDonald and certainly an inform sprinter who won the Ipswich Cup then was narrowly beaten in the Group 1 Brisbane Cup by He Knows Uno. Went sensational last week lowering the track record set the race before, looks well suited here, ran 5.13 and 11.07 coming from the same draw he will be well fancied and hard to beat.
7. Dee Winter (VIC) 27 starts 7-10-5 ($75,710)

Very smart Victorian sprinter he finished third in the Melbourne Cup and has won a Group 2 earlier in the year at Traralgon. Set new figures for a short period last week when he went 25.78 a repeat of that effort puts him right in the finish, nothing wrong with his draw, he is certainly a solid chance in a very hard race.

Well performed brother of Damek raced with solid success in Victoria mainly over the middle distances. However has won five on the track and went super last week recording 26.08 just outside his best. Box eight is never a disadvantage on a one turn track. With a bit luck in running could easily upset some more fancied finalists. Don’t leave him out of the calculations.