Best in back half of Sunday’s Launceston meeting 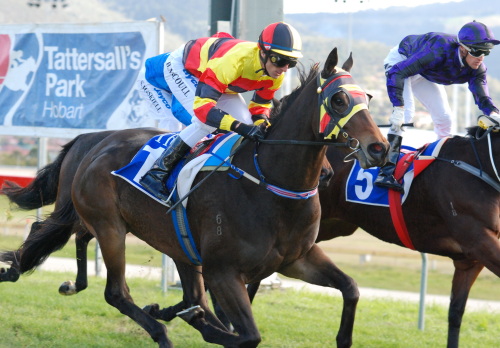 FINDING winners at The TOTE Racing Centre at Mowbray on Sunday won’t be an easy task.

The eight-race card boasts even fields in all races with the first three events with eight runners apiece while the open handicap (race 6) has 11 final acceptors. The balance of the program boasts capacity fields.

The opening race is a maiden/class one over 2120 metres that boasts two last-start winners, Gee Gee Jeuney and Whoforgot Derboots and multiple placegetters Ureshi Tori, Danny Dazzler and Spot Luck that scored an impressive win in Hobart two starts back.

Gee Gee Jeuney won in Hobart last Sunday over 1600m and his trainer Darryl Horner senior is quietly confident the former Victorian gelding has what it takes to handle the rise in class and distance.

Whoforgot Derboots won on the new synthetic track at Devonport on opening day two weeks ago. It was an impressive win and if he takes that form into Sunday’s race he will be hard to beat despite stepping up in distance

Danny Dazzler has been placed at his past two and warrants respect along with Sistarita, Spotluck, Ureshi Tori and Tree Bandit that has been crying out for this distance.

Race 2 also is wide open with a number of genuine chances.

The Graeme McCulloch-trained Uboa has been place d at his past four starts and while a shade disappointing last time he was the trainer’s main Derby hope two seasons back and is overdue fore another win.

Upanova has had to settle for a minor place at his past six starts so he is definitely overdue for a win. He has won two races over 1200m and 1600m but has given the impression this time in that the 2100m will suit.

Risk It, Free Shout and Fair Colony are capable of winning without surprise and Sir Danely Summer is now at his right distance.

The third race is for 3YO maidens and on exposed form the Bill Ryan-trained Bella La Vida might be the way to go on an each-way basis.

Bella La Vida (Ladoni-Finance The Fun) faced the starter only once back in April for a second in a 2YO Maiden over 940m in Hobart behind Feeling Flash that was competitive in a couple of feature races.

In race four, the 3YO and Up Maiden over 1220m, the Adam Trinder-trained Crazy Chester looms as a strong each-way prospect. The four-year-old was good on debut when third to stablemates Digger’s Sunrise and Benefit Of Doubt on the synthetic track at Devonport two weeks ago.

He looked under pressure on the home turn but he kept finding in the straight and would have won in a few more bounds.

Benefit Of Doubt must rate as the hardest for Crazy Chester to beat with Ciao Marco, Hershon, Luca’s Choice and Blixt chances to fill a place.

The fifth race is very open with numerous winning chances but maybe one down in the weights in lightly raced three-year-old filly Flash Al Moon, is the way to go.

Flash Al Moon had two starts as a two-year-old for a debut seventh of 11 followed by a game second to Anelene over 1100m under lights in Launceston at the end of May.

She resumed with an eye-catching second to Yasir four weeks ago on the same track over 1200m and has been freshened for this race.

Capone looms as one of then best bets on the program in race six, the open handicap over 1420m.

Capone scored an impressive first-up win over 1100 metres this track a month ago and followed up with a game second behind the highly promising The Invincible One on his home track at Devonport (synthetic surface) two weeks ago.

He was off the scene for eight months recovering from severe pharyngitus (throat infection).

This is a more suitable distance and would only need to take present form into this race to be very hard to beat.

Crown Consul, one of last season’s better performed two-year-olds, resumes on Sunday in race seven, the class one handicap over 1220m.

He only won one from six last season but he was also placed four times including a game second at his last start in the Sires Produce Stakes behind Pittenweem. Has loads of natural speed and is drawn to get the run of the race. He also has the services of the state’s top jockey. Expect good each-way odds.

Red Letter Daze is a lightly raced eight-year-old mare that goes around in the last race of the day, the benchmark 68 over 1220m.

She resumed from a short let-up with an encouraging third on the synthetic track at Devonport last Sunday week.

Her previous start also was full of merit with a sixth of 13 this track and distance. Last time at Devonport she loomed to win in the home straight after copping a buffeting.

She has a good barrier (3) and a 3kg claim for stable apprentice Rhagan Cross also will enhance her chances. Strong each way claims in an open race.