Best to come from Silent Giggle 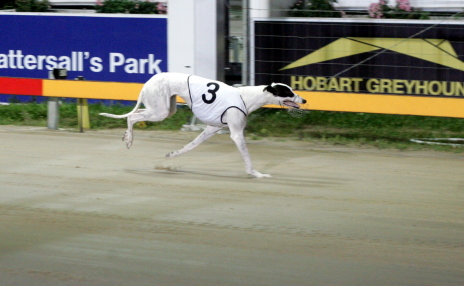 MOONAH trainer Loretta Luttrell believes the best is yet to come from her talented bitch Silent Giggle.

The trainer made the statement after Silent Giggle scored an emphatic win in the Tasfreight Juvenile/graduation over 599 metres at Tattersall’s Park in Hobart last Thursday night.

It was the bitch’s first win in two months but she appeared well suited to the middle distance (599m).

Silent Giggle showed good early speed from box three to be camped on the heels of Spice Of Life (2) that found the rail early and held sway to the 340-metre boxes.

But when Silent Giggle put the pedal to the metal she surged clear and put the end result beyond doubt before reaching the home turn.

Silent Giggle went on to score by over five lengths from Maddison Dee with Wynburn Whirl coming from well back on t7he turn to grab third in advance of Sherrin’s Choice.

Luttrell said Silent Giggle appreciated the middle distance but that the bitch was adaptable and suitable to all distances.

“This bitch is very versatile and while she did the job well tonight I believe she is capable of winning over all distances because she is such a clean-winded dog,” Luttrell said.

“She has won over the sprint distances on all three tracks (Hobart, Launceston, Devonport) and she’s won over 600m in Launceston and Hobart.”

“”The plan is to step her up to the longer distances in the coming months and I’m sure she will have no trouble running out a strong 700 in Hobart,” she said.

Silent Giggle has had 22 starts for six wins and a dozen minor placings for just over $11,000 in stakes.

While those statistics are not mind blowing, she has been a good money spinner for her owner Len Harley.

Silent Giggle began her racing career in September last year and once she got the hang of it the daughter of Silent Guardian showed promise winning two in succession two months after her debut.

Ï tested her over 600 metres in Launceston in December and she won at her first try and she dropped back to 461 metres at her next start in Hobart and she won again and she beat Tree Bandit by five lengths that night,” she said.

Luttrell has not mapped out a race plan for Silent Giggle beyond last Thursday night.

“I’m in the process now of looking at her race program for the coming weeks,” she said.