Best yet to come from Pants Off Friday 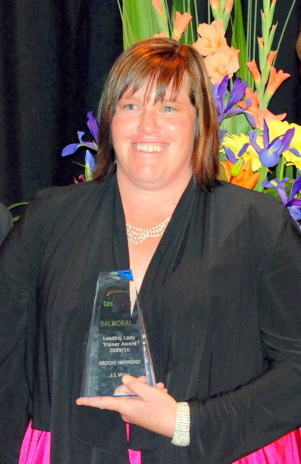 TALENTED harness racing trainer Brooke Hammond has prepared some handy horses over the years but Pants Off Friday could have the potential to be the best.

Hammond admits Pants Off Friday has untapped ability with the four-year-old proving that by making it three wins in succession in Launceston last Sunday night.

The gelded son of Blissfull Hall had to do some work early before finally settling outside of the leader Iza Dream (Gareth Rattray).

Pants Off Friday’s regular driver Kate McLeod was content with the solid pace and when she called on her charge for the supreme effort he laid down the gauntlet to the leader and eventually wore him down to score by a long neck with outsider Paris Express six metres astern.

“The horse has done no work – at the moment he’s just running on sheer ability,” Hammond said.

“He still has a lot of improvement in him.”

“Depending on how he pulls up from this run I’ll probably give him another start in Hobart next Sunday night and then tip him out for the rest of the spring.”

“It will be interesting to see what this horse will do when he draws a good barrier because he’s drawn gates 4, 4,7 and 7 so far, so he’s due fore a change of luck,” she said.