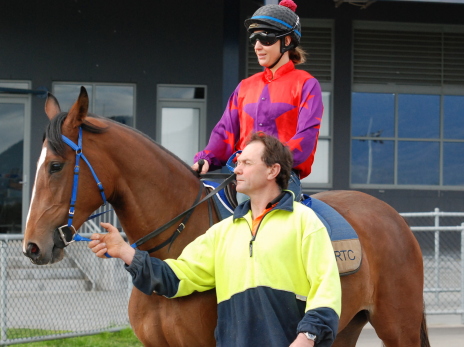 TASMANIA will unveil its latest apprentice jockey on Sunday when Sigrid “Siggy” Carr dons silks for the first time at a race meeting.

Carr, 24, has been around horses all of her life and she has been riding since she was a toddler but she wanted to wait until she was absolutely sure she wanted to be a jockey before taking the plunge.

She completed her last qualifying trial at Tattersall’s Park on Tuesday when she won aboard Hello Baby Doll, prepared by her father Royston Carr.

Carr’s first ride on Sunday is aboard the three-year-old filly Summer Downs that is prepared by her father.

The filly performed well in a recent trial and will have her share of supporters, especially those who have followed Siggy’s career closely these past few years.

But her main winning chance appears in the open handicap (race six) in which she will partner the Michael Voss-trained Turbo Qui that drops back to his pet distance of 1100 metres and with Carr’s four-kilogram claim he gets into the race just above the minimum.

Carr’s last ride for the day is aboard another Voss-trained galloper in Rose Of Innocence in the last race on the eight-event card.